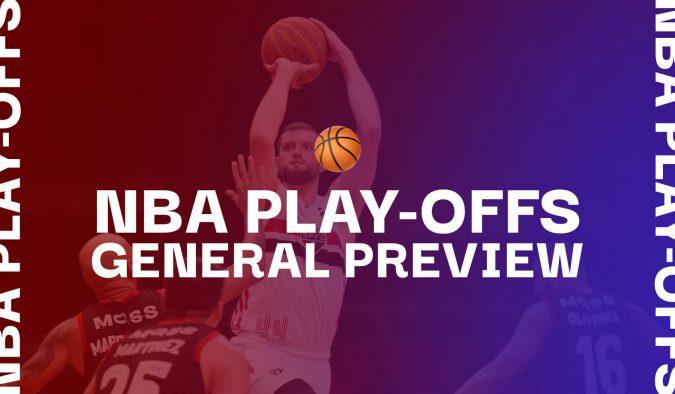 This has been one of the best NBA regular seasons that I can remember. The MVP race seems to be as close as it has been in several years between Nikola Jokic, Joel Embiid, and Giannis Antetokounmpo. The fact that versatile big men like these three are dominating the league goes to show where the league is going. Teams need size and athleticism to compete in today’s NBA.

Playoff seeding was not decided for both conferences until literally the last day of the regular season. We saw teams resting players on purpose to avoid matchups against teams that would potentially come out of the play-in tournament. It was an exciting finish and now the fun begins. The NBA Playoffs! 16 of the best teams in the league are playing for a maximum of two months.

Last year gave us a fantastic NBA Finals where Giannis Antetokounmpo won his first title in convincing fashion as he cemented his legacy as one of the best players in history. Giannis was the NBA Finals MVP as he averaged 35.2 points per game and finished the series off with a 50-point win. He averaged a career-high in points, but that still may not be enough to win MVP.

The Milwaukee Bucks and Phoenix Suns have a great chance to get back to the NBA Finals this season. The Suns had the best record all season as Devin Booker and Chris Paul have been great. They have an easy path to at least the Western Conference Finals. The Suns are the favorites to host the Larry O’Brien Trophy in June. The Bucks have the second highest odds.

The East has more depth than the West this season. The Heat have the #1 Seed, while the Bucks, Celtics, and 76ers all tied for the #2 Seed. The Raptors are one of the hottest teams in the league, while the Nets are a very dangerous #7 Seed. The East will be a battle, while the Suns and a healthy Warriors are the two best in the West. Can’t wait to watch it all play out!

Winning the Eastern Conference regular season for the first time since the 2012-’13 season was the Miami Heat. They were tested as the Boston Celtics, Milwaukee Bucks, and Philadelphia 76ers all finished just two games behind them. The Heat finished the season strong winning six of their last seven games, but the Atlanta Hawks are not your typical #8 Seed this season.

The #2 Seed was an absolute battle! The Celtics came out on top, but have to play arguably the best ever #7 Seed in the Brooklyn Nets with a healthy Kevin Durant and Kyrie Irving. Rumors are Ben Simmons may even be ready to go. That’s a tough test right out of the gates, especially without starting center Robert Williams. Jayson Tatum and Jaylen Brown will have to be great.

The reigning champions come in with the #3 Seed as Giannis Antetokounmpo averaged a career-high 29.9 points per game. He is once again in the running for another MVP Award. They get what feels like the best matchup in the first round against the Chicago Bulls who have lost 15 of their last 22 games. The duo of DeMar DeRozan and Zach LaVine are dangerous though.

Joel Embiid took his game to another level this season as he finished as the scoring champion. His durability is no longer a concern as Embiid played a career-high in minutes and games. James Harden has struggled since joining the 76ers, but he is still a big weapon. However, the Toronto Raptors may be the hottest team entering the playoffs winning 14 of their last 18 games.

I’m going with the Milwaukee Bucks to win the Eastern Conference for the second consecutive season. Their second-round matchup against the Celtics or Nets will be their biggest test. Playing one of those teams after a likely hard-fought series will give the Bucks an edge as well. At the end of the day, it is very tough to see anyone slowing down Giannis. Give me the Bucks!

After their first NBA Finals appearance since the 1992-’93 season which resulted in a loss, the Phoenix Suns are leading the league with a record of 64-18. They won the Western Conference by eight games. They will be tough to beat as they have a league-best 32-9 record at home. The Suns are not invincible, but they do have an easy road. First up – New Orleans Pelicans.

The Memphis Grizzlies have been the deepest team in the league this season. That was proven as they went 20-5 without Ja Morant. They were even able to beat the Suns shorthanded late in the season. Don’t sleep on their matchup with the Minnesota Timberwolves. They are arguably as talented as the Grizzlies and have similar playoff experience. This series is going seven.

Despite Stephen Curry missing their last 12 games, the Golden State Warriors were able to hold on to the #3 Seed. It is believed that he will be back for their playoff run. Curry better be ready to go because their matchup against the Denver Nuggets will be a tough test. Nikola Jokic was the first player in NBA history to record 2,000 points, 1,000 rebounds, and 500 assists in a season.

Interested in a slow-paced, defensive battle? This Dallas Mavericks and Utah Jazz matchup is the game for you! Since the All-Star Break, both teams rank in the last two spots in pace. Luka Doncic leads the league in usage rate with 37.3% per game, but his injury last game is a major concern. Can the duo of Donovan Mitchell and Rudy Gobert coexist for one last playoff run?

The Phoenix Suns are not a juggernaut by any means, but they have had an incredible season. Time may be running out for Chris Paul to get that elusive championship ring. I think he gets another crack at it this year in a revenge matchup against the Milwaukee Bucks. Devin Booker has also mastered his game, which is scary. However, don’t sleep on a healthy Warriors team.

A rematch of last year’s NBA Finals! This isn’t the NCAA Tournament. Usually, the cream of the crop rises to the top. Others may get cute and try to predict a sleeper team to come out of each conference and I have a few sleeper options as well. However, even though that is possible, it is impossible to ignore a potential rematch between the Phoenix Suns and Milwaukee Bucks.

Matchups and path is the key to get to the NBA Finals. The Suns have one of the easiest paths to the Western Conference Finals. They will play the rising New Orleans Pelicans who they beat three of four times this season. After that they will get a matchup between either the Dallas Mavericks with an injured Luka Doncic or Utah Jazz who always come up short in the playoffs.

Where they may get caught is if they have to play a healthy Warriors team in the conference finals. That will be one of the best series in the playoffs if it happens. Seeing a Warriors upset is easy if they are healthy, but Stephen Curry, Draymond Green, and Klay Thompson have only played one game together all season. A potential matchup with the Grizzlies would be too easy.

The Suns have been the best team all season and the Bucks have a cheat code with Giannis Antetokounmpo. The Bucks don’t seem as invincible as last season, but their path starts off with a pretty easy series against the Chicago Bulls who they have swept during the regular season. Their second-round matchup against the Boston Celtics or Brooklyn Nets will be the toughest.

Losing PJ Tucker seems like a big loss for the Bucks defensively, especially in this matchup against the Suns. The Bucks rattled off four-straight wins over the Suns after going down 0-2 right off the bat. The Suns will once again have the home court advantage against anyone, but this time they get Chris Paul that Championship trophy. They are the favorite, but it is deserving.

The last player to win the Finals MVP award on the losing team was Jerry West when his Los Angeles Lakers lost to the Boston Celtics in 1969 in seven games. There is a chance that Giannis Antetokounmpo could do that on a losing team if he averages a massive triple-double, but that is still very unlikely. The voters love points so that is why I am going with Devin Booker.

Last season in the six-game series against the Bucks, Booker averaged 28.2 points per game with two games of 40 or more points. He shot 45.5% from the field and had one game where he poured in seven 3-pointers. However, when he put up 42 points, Booker had no 3-pointers and shot 17-for-28 from the field. He has the experience and will be better the second time around.

Booker has averaged 25.4 points per game over his last six regular seasons. In his only postseason in his career, he averaged 27.3 points while playing over 40 minutes per game. Scoring is what Booker does best. He is one of the best pure scorers in the league as he can fill it up from all three levels. Booker came in 12th in scoring this season averaging a career-high.

Another benefit that should boost the odds for Booker to be the Finals MVP is Chris Paul has taken a major step back in the scoring department. Paul is averaging a career-low 14.7 points as he is only attempting 11.3 field goals per game. Where he excels is being a floor general. Paul leads the league in assists with 10.8 per game and ranks second in steals this season.

With Paul dishing out assists and DeAndre Ayton controlling the glass, Booker will have plenty of opportunities in a NBA Finals series to light up the scoreboard. The Suns have the best path to get to this position and Booker will be a big reason why. Give me Booker for NBA Finals MVP.

18+ gamble responsibly. All Paddy Power odds displayed correct at the time of publishing.

Sign up to Paddy Power and get a full refund if your first bet loses. Grab an account through the offer below and place £30 on any of the NBA Play-Off predictions. Here are the two possible outcomes: