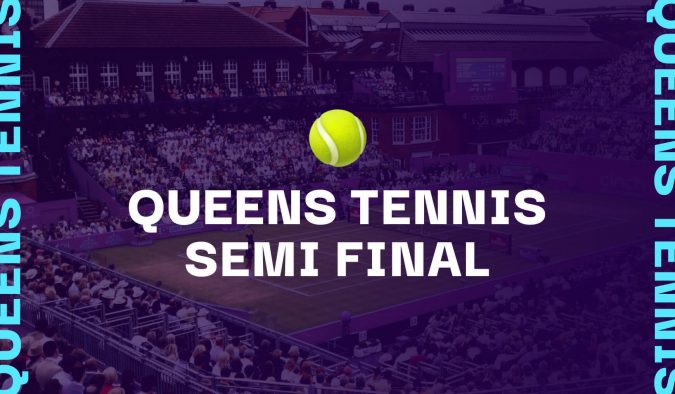 Sunday’s final of the Cinch Championships at Queen’s Club has thrown up one surprise finalist and one who had been widely expected to make the title match.

Filip Krajinovic is the man in the former role, a player who had never won a tour-level match on grass prior to this week. Indeed, his previous grass court win at any level came back in 2015.

“To be honest, I don’t like to play on grass and every year I find a way to skip the tournaments,” Krajinovic admitted after his semi-final win.

Matteo Berrettini is the defending champion and a player pretty much no-one is surprised to see back in the final. Last year’s Wimbledon runner-up has overcome a tricky draw with minimal fuss and starts this one at just 1/6 for victory.

But will he justify those odds – and what are the best bets for the Queen’s final?

Route to the Final

Krajinovic beat Jenson Brooksby in Round One in straight sets but then needed to go the distance to get past veteran Sam Querrey and British wild card Ryan Peniston.

I didn’t expect him to get past Marin Cilic in the semis but the Serb landed the upset by holding his serve throughout the contest. He’s been broken five times across his four matches this week – that’s one more than Berrettini.

But he’s also broken his opponents’ serve more – 13 times in total to Berrettini’s 12 – and what’s particularly noteworthy is that those breaks have come from just 25 breakpoints. A conversion rate above 50% on grass is excellent, although some would say unsustainable.

Berrettini has fashioned 38 break points himself and while he’s far from the best returner in the game, you’d expect him to fashion more chances here.

The Italian has dropped just one set so far, surviving a tight, second-round battle with Denis Kudla.

In the last two rounds, he’s had just one slip on serve in each match, falling 4-1 down to Paul before losing only two more games, and then failing to serve out the first set of his semi-final against van de Zandschulp, dropping his delivery with a double fault. He broke in the next game to win the set anyway.

The pair have met twice before, although never on grass.

What we’ve seen so far (all on clay) is heavily in Berrettini’s favour. He won the inaugural clash in three sets in Budapest in 2019, while the most-recent meeting came in Belgrade last year with Berrettini winning 6-4 6-4 and holding serve throughout.

Across both matches, he’s lost serve just once and that was in the very first set they’ve played. He’s since won four in a row without dropping his own delivery.

How will the match be won?

First up, Krajinovic has to serve well, as he did against Cilic on Saturday.

Berrettini hasn’t been as dominant on serve as he was at last year’s tournament but he’s still hard to break and sloppy service games are few and far between for a man who has already served 54 aces this week.

Krajinovic’s poor record of returning his serve should be of concern to potential backers.

What will give Krajinovic hope is the fact that Cilic’s game is not dissimilar to Berrettini’s with both men loving to play the forehand behind the big first serve – the one-two punch being tough to deal with for most opponents.

What he did particularly well against Cilic was using the pace of his opponent’s shot against him – numerous times he was able to turn a rally round with good counter-punching.

Krajinovic also picked off Cilic on several occasions when he came to the net, producing some good passes which will perhaps leave Berrettini a little wary about coming forward.

The Italian is a good volleyer though and as long as he picks the right times to approach the net, it’s hard to see Krajinovic living with him.

He’s also got a strong backhand slice, always an important shot on the grass where the ball naturally stays low. That should help pin Krajinovic back behind the baseline.

Berrettini has won 19 of his last 20 grasscourt matches for a reason (for the record, the last defeat came in the 2021 Wimbledon final to Novak Djokovic) and he looks a worthy favourite.

So how to back Berrettini? I know I’ll win little respect putting him at 1/6.

Well, for those prepared to deal in odds-on shots, 8/15 about him winning in straight sets seems OK. Berrettini has now won seven of his nine Queen’s Club matches in straight sets and he looks to be the better player in most departments ahead of this clash.

For a way of backing the Italian at odds-against, it’s worth returning to the player under/over games market – one which has proved fruitful for this column on occasion this week.

Basically with this bet you are looking for him to win something like 6-4 6-3, as he did in the semis. Berrettini has landed this bet in three of the four rounds so far, while the added bonus is that it also wins if Krajinovic manages to land an upset and claim a straight-sets victory.

For those looking to back Krajinovic – or indeed those seeking a saver – it’s worth considering the 10/1 on offer about the Serb winning the match after losing the first set. He’s already landed this in matches against Sam Querrey and Ryan Peniston this week.

Clearly the opponent here is at a different level – Berrettini is the world number 10 – but he’s also a player who’s now played a lot of tennis in the past two weeks. And this having played none at all for the best part of three months.

Following hand surgery, Berrettini only returned to action in Stuttgart last week where he won the title, beating Andy Murray in the final. It’s worth pointing out that Murray lost the first set of that match before levelling it only to then suffer an injury in the decider. Had that not occurred, the Briton may well have claimed that ‘win from behind’.

While he’s not had the toughest of weeks in terms of time on court, this will be Berrettini’s ninth match in 12 days so it wouldn’t be a surprise were fatigue to play a part.

Of course, Krajinovic will need to drag him into a lengthy battle and force that final set but were it to go that far then the Serb may well fancy his chances.

The 10/1 looks worth a small play, while for something a bit shorter 7/1 about a 2-1 Krajinovic victory offers a similar bet with greater leeway.

Sign up to Paddy Power and get a full refund if your first bet loses. Grab an account through the offer below and place up to £30 on the Final of the Queen’s Club Championship. Here are the possible outcomes:

How to watch The Queen’s Club Championship Final