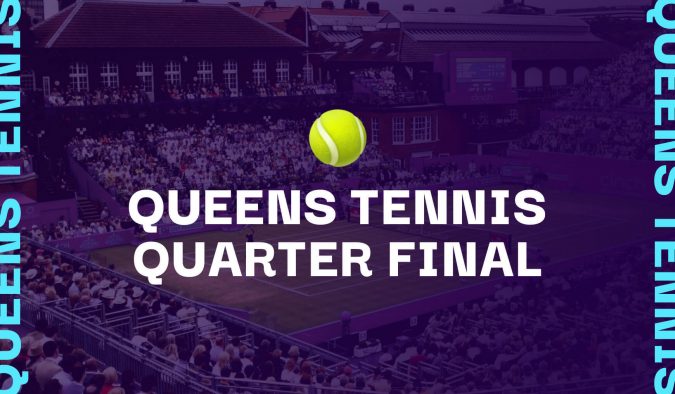 Friday is quarter-final day at the cinch Championships at London’s Queen’s Club.

Only two of the eight seeds have managed to reach this stage – ante-post favourite Marin Cilic and defending champion Matteo Berrettini – so the tournament has already seen its fair share of upsets.

Will there be more in the last eight? Our expert guides you through the matches…

Given their limited experience on grass, a quarter-final between these two is something of a surprise.

Van de Zandschulp seems to have the more natural game for grass and showed that, to some extent, during his victory over former champion Grigor Dimitrov in the previous round. That’s undoubtedly a big part of why he’s been installed as a marginal favourite for this one.

However, Davidovich Fokina was pretty impressive in defeating Alex de Minaur, certainly in the second half of the match. To be fair, he could easily have lost in straight sets but saving three break points at 3-3 in the second set having lost the first proved the turning point.

He was the better player after that and managed to drag his opponent around the court. If he can do the same against a poorer mover than De Minaur in this match-up, I can see him landing the (small) upset.

With ‘Foki’ also having won the pair’s only previous match (albeit on clay), a small play at 6/5 is advised.

Defending champion Berrettini sailed rather close to the wind in Thursday’s clash with Denis Kudla – having lost the first set, he was a tie-break from defeat but pulled through to eventually win in three.

However, another tough test potentially lies in store here. Paul was ruthless in his dismissal of Stan Wawrinka, winning 6-1 6-4. He produced just five unforced errors and if he can keep the error-count low here, he can drag Berrettini into the lengthy rallies he’ll feel less comfortable with.

The Italian would like to win this match behind his serve but he’s not been as dominant on it as he’d have liked to be so far, offering up 16 break points across the first two rounds. Admittedly he’s managed to save 14 of those but that sort of percentage isn’t really sustainable over a longer period and Paul may be able to fashion chances if he’s still in the groove.

The American is no slouch on the serve – he slammed one down at 139mph against Wawrinka – while he’s also capable of trading big forehands with Berrettini. There’s also the strong possibility that the favourite is feeling it after a long week in Stuttgart last week, where he won the title in what was his first tournament in three months following hand surgery. He’s now played six matches in nine days with four of those going the distance.

Considering that, and the way both men played in the last round, Paul may be worth chancing at 9/4 to win this one.

I don’t think we’ve got a great deal to go on when searching for the winner here.

There’s no head-to-head record and with this week being Peniston’s debut on the ATP Tour, we’ve not got much to look at in terms of his history against top-50 players such as Krajinovic. If we rely solely on the latter, things look great for the British wild card. After all, he’s beaten top seed Casper Ruud and world number 46 Francisco Cerundolo so far.

Therefore it’s not difficult to make an argument to suggest he should be shorter than 5/4 to win this. Neither Ruud nor Cerundolo had much experience on grass, a fact which undoubtedly benefited Peniston, and here he’s up against another player who has done little on the surface.

In fact, Krajinovic’s first-round win here was his first grass court victory in seven years. When I first found out that statistic, it surprised me given the Serb has enjoyed some good results on slick indoor hardcourts in the past. But he’s done well at Queen’s so far, beating rising star Jenson Brooksby and the experienced Sam Querrey – both players reached ATP finals on grass last season.

Krajinovic is an experienced campaigner himself and while he doesn’t bang down as many aces as Queerey or Berrettini, I do feel he’ll be able to cause problems for the home hope with his serve, which looked in good working order on Thursday evening.

I can’t say I’m straining at the leash to back him at 8/13 though so perhaps a long-shot bet could be the right approach here.

Peniston started like a train against Cerundolo before tailing off somewhat and frankly he was a little fortunate to win despite having been a break down in the final set.

Krajinovic won from behind against Querrey – the third time in his last 14 best-of-three-sets matches he’s completed such a turnaround – and a repeat here is on offer at 5/1.

Ante-post tournament favourite Cilic struggled in his first-round match at Queen’s Club but improvement was there for all to see against Alexander Bublik in round two.

Cilic fended off the big-serving Kazakh to move into this quarter-final, only losing his serve once. The first-set tie-break predicted in this column duly arrived and that may be an avenue worth walking down again in this contest.

Ruusuvuori came through qualifying so has now won four straight matches at this event, including victories over former champion Feliciano Lopez and Briton Jack Draper – both men possess big serves, just like Cilic.

But perhaps the most impressive feature of the Finn’s game so far this week has been his serve. Ruusuvuori has lost his own deal just twice in those four matches. With Cilic’s return game not at the very top level, I suspect the Croatian won’t fashion too many break points and will focus on holding his own serve, something at which he is very adept.

The fact they’ve never faced each other is also good news for those expecting service to dominate – it may well take time for both men to get a read on the other’s delivery.

As a result, the first-set breaker looks a tempting price at 11/4, one I’m more than happy to back.

Sign up to Paddy Power and get a full refund if your first bet loses. Grab an account through the offer below and place up to £30 on the Quarter Finals of the Queen’s Club Championship. Here are the possible outcomes:

How to watch The Queen’s Club Championship