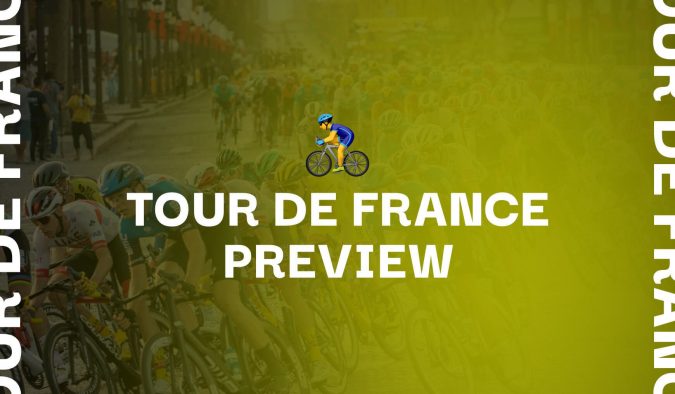 The Tour de France is rapidly approaching and for some, it has been a long wait. In this article, we will focus on what I find to be the best three bets prior to this year’s Tour de France. There will be different categories and that is what is lovely about betting on Grand Tours – there is a very big betting market with race specials you normally can not access in the regular season. There will be three bets with a high variation of odds.

Jonas Vingegaard to Finish on the Podium

The first bet is in the general classification. Vingegaard rides for Jumbo-Visma and has duo leadership with Primoz Roglic. They are the duo that on paper, can challenge Tadej Pogacar who has won the last two seasons.

Vingegaard had a major breakthrough last season after Roglic crashed badly and had to abandon a few stages later. He was the only rider to drop Pogacar uphill in 2021 – on the Mont Ventoux stage. This year, he is looking even better. He did his best climbing performance of the year in the warm-up race Criterium du Dauphiné, pushing 6.32 watts/kg for 34 minutes. Prior to the race, he mentioned he was not feeling well enough to ride for the general classification in the race and merely used it as a warm-up.

The reason I do like this bet so much is the fact that I think he will do better than Roglic. On the same day he produced his best climbing performance, he almost dropped Roglic on the ascent of Plateau du Soleil. In terms of level, he is equal to Roglic. However, Roglic has had problems in Grand Tours – often fading away in the last week. This bet does not mean Roglic can not finish within the podium as well, which is vital to remember.

Another key aspect is the fact that most of the mountain top finishes this year, or the ones that will impact the general classification significantly, all have finishing climbs around 35-40 minutes. A similar length as the one he did in Criterium du Dauphiné – his best climbing performance ever.

Now that we have discussed the three main contenders, I simply think it will be hard for INEOS or the few others who pose a threat to finishing on the podium due to the long time trial on stage 20. Here, Vingegaard will be one of the very best general classification riders placed.

Bahrain-Victorious to Win the Team Classification

Now, team classification is not something a lot of teams do care about. We have the three big teams, UAE Team Emirates (Pogacar), Jumbo-Visma (Roglic & Vingegaard) and INEOS (A. Yates, G. Thomas and Martinez) all wanting the yellow jersey. Bahrain-Victorious often knows when that is not within reach.

Therefore, they have won the last three Grand Tour team classifications. They won it in the Tour de France 2021, La Vuelta a Espana 2021 and in the Giro d’Italia 2022. I can see two

very good reasons for them going for it again. The first reason is the motivation. You do win 50.000€ in Paris if your team wins the team classification. The second reason, and biggest of the two, is the fact ASO has raided their houses and hotels for the second year in a row without finding any illegal substances. I think the team is furious and want to show once again the collective strength of the team – to insult ASO.

The riders they bring to the race are good. They have Haig and Caruso for the GC – and both of them should fight for a top-5. They have domestiques (helpers), who all do very well in the mountains too. While the three above-mentioned teams will have to use their riders in order to win the general classification, what Bahrain-Victorious often does is send a rider in the breakaway – to gain time in the teams classification. The riders they have for the breakaway in this edition are none other than Mohoric (double stage winner last year) and Dylan Teuns (who has won two mountain stages in the Tour de France). Mohoric will go for the flatter stages (Stage 5, Stage 8, Stage 13, Stage 15 and Stage 19) while Teuns will likely go for the harder stages that suit the breakaway (Stage 7, Stage 9, Stage 10, Stage 14 and Stage 16). Whenever they finish ahead of the peloton, they gain time for the team classification.

It means they can use their riders differently in order to win the classification while other teams must use some riders to make the other riders suffer on the road. It has proved a good tactic in the last three Grand Tours and I do not see them stopping now.

When it comes to the points classification, there is a lot to take into consideration. How many classic bunch sprints will we see? How many intermediate sprints will be won by the fastest riders? How many points will the endurance sprinter win when the fastest sprinters are dropped?

In this category, Wout van Aert is the big favourite. He is in a difficult spot, having to work for his team and participate in bunch sprints whenever he can. He has not had the best warmup for the race either, having to miss training for four days before the biggest race of the season. I hear rumours regarding the team wanting him to win the green jersey more than they want to win the yellow jersey. Of course, it comes from the hardcore Belgian cycling fans.

So why Mads Pedersen? My thought is, he is as versatile as Wout van Aert, Peter Sagan and Matthews. He will make the cut on the days too hard for the fastest and he will score points on many different stage types. He is also faster than Wout van Aert, Peter Sagan and Matthews in a flat sprint and that means scoring more points in the classic sprint stages.

I also do think he is having his best season yet – and he won the World Championship in 2019. He is faster than ever, climbing better than ever and his current level is very, very high with a very good result in the Baloise Belgium Tour and the national championships in Denmark.

Sign up to Betfair and get a full refund if your first bet loses. Grab an account through the offer below and place £20 on the 11/1 Tour de France Best Bet. Here are the two possible outcomes: