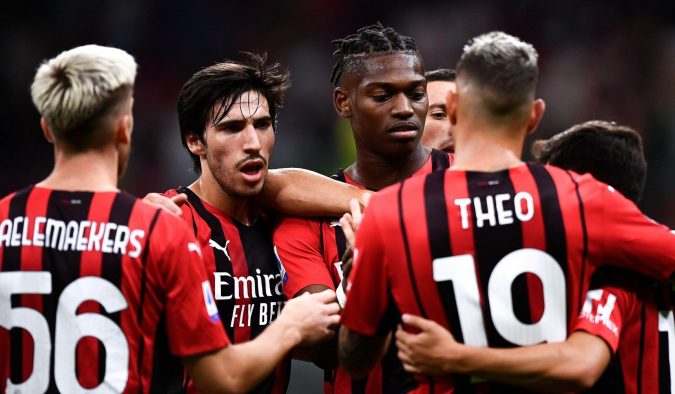 AC Milan look to widen their gap between themselves and their city rivals at the top of the Serie A, as they host Empoli at the San Siro on Saturday night. Milan returned to winning ways after a narrow victory over Napoli thanks to an Olivier Giroud goal, which seen them end the weekend top of the table. Empoli’s bleak run of form continued as they were held to a stalemate against Genoa in a fierce bottom of the table clash which seen 8 cards!

AC Milan have gone 8 games without defeat in all competitions, helping them sit 2 points clear at the summit of the Serie A with 10 games to go. A worry for Stefano Pioli though will be the number of draws recently, but the win in Naples last week shows that Milan might have turned a corner in their efforts to win the league.

Empoli have been in shocking form recently and have the lowest points in the league since mid-December, despite still sitting relatively far from relegation spots which is helped by their great run at the end of November. They travel to Milan with a poor away record of late and haven’t been able to score away from home in their last 3.

Take a read of my research below along with a pre-match cheat sheet if you fancy a bet builder for this Saturday night Serie A action!

The first selection of my bet builder is Milan to win (-1) as they hunt for their first Serie A title for the first time since 2011. These type of games have been where Milan have struggled recently against lower league opposition, having only won 2 of 6 of their last meetings against bottom half teams. However, they host a side who have failed to win a game in all competitions since December 15th, so a win should be on the cards for the Rossoneri.

Every game from now on will be huge for Milan with only 10 games to play, it’s these kind of games that teams need to win to see out a title race and I think Milan could run riot against a poor Empoli side.

Only bottom of the table, Salernitana, have shipped more goals than Empoli, conceding 53 goals in 28 games, averaging 2.5 goals conceded per game. AC Milan also rank 3rd in goals scored per game in Serie A, having scored 1.9 on average. Milan have won their previous 2 meetings against Empoli, where they won by 2 or more goals in each of these. These stats make for good reading for this handicap selection, and I fancy title hungry Milan to go out and get the job done comfortably here.

Both teams to Score – No

Leading on nicely from the previous selection, I am backing both teams not to score here. The San Siro has a difficult place to travel for away sides recently. AC Milan have kept a clean sheet in 4 of their last 5 games at home in all competitions including games against Juventus, Lazio and Inter so I fancy them to keep the ball out of the net against this Empoli side.

Empoli have failed to score in their last 3 games on the road and travelling to play top of the league in the form they’re in, I expect this poor run to continue here. The last meeting between these sides at the San Siro seen Empoli hammered 3-0 which could be a similar score line to this weekends game.

Milan put in a great defensive display in a huge game against Napoli last week showing they have what it takes to keep the ball out of the net in important games. Kalulu filled in nicely for Romagnoli as he was ruled out with an injury in that game but with the captain set to return to the squad, it will help sure up the Milan back line.

Prediction: Both teams to Score – No

Petar Stojanovic to be Shown a Card

The final selection of my bet builder is Empoli right back, Petar Stojanovic to be shown a card. The 26-year-old has started 25 games this season so should featured in his usual right back spot again at the San Siro.

As you will see from my cheat sheet below, Stojanovic averages 1.75 committed which has seen him pick up 6 yellow cards this season. The thing that caught my eye here is that he will be defending Rafael Leao out on Milan’s left wing. Leao averages 2 fouls drawn per game, and I think Stojanovic will have a tough shift up against one of the leagues standout players this season.

Empoli could well be frustrated in this game which could see the cards come out for Daniele Chiffi, the Italian referee averages 4.40 cards per game so it could be a bit of a card fest as it was in Empoli’s last game.

Prediction: Petar Stojanovic to be Shown a Card

Back the 10/1 AC Milan v Empoli Bet Builder below ⬇️

Sign up to Paddy Power and get a full refund if your first bet loses. Grab an account through the offer below and place £30 on the 10/1 AC Milan v Empoli Bet Builder. Here are the two possible outcomes:

How to watch AC Milan v Empoli in the Serie A