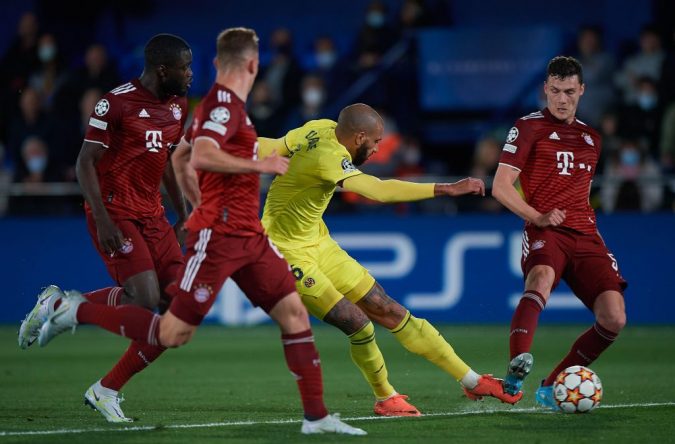 It was a particularly good evening in Villarreal for Unai Emery last week. The early goal scored by his Dutch attacker Arnaut Danjuma, was enough to secure a huge upset 1-0 win over Bayern Munich in the first leg. This was Bayern’s first away defeat in the Champions League since 2017 and very few expected Villarreal to be the ones that took their scalp last Wednesday. In preparation for one of the most interesting games on Tuesday. I’ve prepared my top 3 Bet Builder Tips and a complementary Cheat Sheet.

The result while shocking, was definitely not a fluke. Villarreal had the lion’s share of the chances. Even after going ahead, they were looking to extend their lead over the German champions. They had a disallowed goal for a marginal offside and Manuel Neuer was lucky to not be punished for being off his line by Gerard Moreno, who clipped the post from long range.

Manuel Neuer will be having flashbacks to Dejan Stankovic’s incredible volley in 2011, that called into question his sweeper keeper style. The whole team also seems to be mentally affected by last weeks result. They rolled out an unconvincing 1-0 win over Bavarian rivals Augsburg at the weekend which was a world away from their previous 3 and 4 goal margin victories in the league.

The team’s mind is clearly focused on Tuesday’s game, and they’ll be itching for a result against The Yellow Submarines in front of their home fans. While Villarreal shut them out at El Madrigal, it seems less likely that they’ll be able to do so again on the road. From 12 wins this season, only 3 of them have come away. However, Villarreal’s league form recently suggests that they shouldn’t be anywhere near the Champion’s League knockout stages. They’ve only managed to get 1 point from a possible 9 in their last 3 games against pretty poor opponents, but it is worth remembering that they dumped out Juventus in the last round. This is a team that’s defied the odds more than once this competition, and it could be unwise to count them out again solely based on their league form.

Etienne Capoue to be Shown a Card

The referee in charge of the action is incredibly tight when it comes to cards. As per the Cheat Sheet, he only averages 2.2 yellow cards a game! In his native Slovenia this makes him the lowest issuer of cards in the league. For context, the 2nd lowest is 3.0 and the highest is 6.0 per game. You may be wondering why I am recommending a card at all in this match, but I believe that Etienne Capoue is in real peril of picking up a booking tomorrow night to override the ref.

Capoue is an integral part of Unai Emery’s well-drilled Villarreal unit. He lines up alongside the Spanish technician Dani Parejo in the middle of the park, as an easily defined enforcer. His job for his manager is to break up play, disrupt attackers and occasionally drive forward. This allows his counterpart to dictate the play with his playmaking ability allowed to shine via Capoue’s hard work.

Fans of the Premier League will not remember at Capoue at Watford or Tottenham as a saint by any means. He’s received a club high 7 yellow cards this season in the league. Unsurprisingly, this means he commits a high number of fouls at 2.11 per game. The Frenchman will be on double defensive duties against Bayern who will be relentlessly banging the door on Tuesday night.

Bayern can attack at lightning speed, so to prevent them entering the attacking phase he will inevitably have to make some risky tackles in the build-up. The majority of this responsibility will fall on him and he didn’t leave the last leg unscathed by any referee warnings for his tackling.

Lurking in the middle of the park on the opposite team will be Joshua Kimmich and Marcel Sabitzer. They are the most fouled Bayern players, with 2.3 and 2.07 fouls per game to their name respectively. The German’s average over 60% possession consistently which was also true of the last leg. The defensive midfielder will be chasing the ball against a Bayern team who will be hell-bent on scoring. This makes him prime candidate for a booking at odds of 2.5.

Prediction: Etienne Capoue to be Shown a Card

Robert Lewandowski to have 2+ Shots on Target

This is a more obvious selection that you will probably need less convincing on. Robert Lewandowski is feared by goalkeepers and defenders alike across the European continent. He is the first name on the team sheet for Bayern and for obvious reason too. He’s scored 32 goals this season which averages out at over a goal a game domestically.

The Polish striker may get on the scoresheet tomorrow night, but I prefer the striker to have 2 or more shots on target against Villarreal. They have shut out the Bavarians once already and I am reluctant to predict the same thing won’t happen again. He will be the main focal point of a Bayern team with a point to prove so there will be plenty opportunities to test the Villarreal keeper on Tuesday.

Looking at the Cheat Sheet, it is not just the striker’s goalscoring ability that is impressive. He averages 2.41 shots on target per game from an eyewatering 4.86 shots per game. His capability of hitting the target is no doubt helped by his accuracy which by crunching the numbers turns out to be just under 50%!

The last outing at Augsburg was a lacklustre team performance, but Lewandowski scored the only goal of the game and managed 2 shots on target. This is a great example of Lewandowski’s consistency at hitting the target independent of his team’s performance. The last leg saw him only hit the target once. However, the man is not to be messed with in reverse fixtures.

The 1-1 draw against Salzburg in the previous round, saw him draw a blank with goals and shots. The second leg saw him put on a show with a hat-trick of goals and 8 shots with 4 hitting the target! He’ll also be on penalty duty should the need arise, which will help this selection which is available for odds of 1.33.

Prediction: Robert Lewandowski to have 2+ Shots on Target

Arnaut Danjuma to have 1+ Shots on Target

The Dutchman was a man of the match contender in the last leg narrowly missing out to his teammate Lo Celso. He was a problem for Bayern’s defence cutting in from the left-hand side and his goal proved to be the difference maker the last time out. He was in the right place at the right time to poke in Dani Parejo’s shot to flatfoot Neuer.

His positioning for his goal last week is worth a look. You would be surprised to see how central Danjuma was as an inverted winger, and you might even suggest he was a striker based on his position alone. This is a very common position for Danjuma who is often found to be waiting for the ball to come to him in what would be a number 9 role. The overwhelming majority of his shots come from inside the penalty box, around 85% of them.

This to me shows that he is more likely to be shooting from a goalscoring position. He is not the kind of winger that will blast it from 30 yards, and this is part of the reason why he averages 1.38 shots on target per game. He also has the ability to beat his man with skill which will work in this selections favour if it is a tight cagey game.

Bayern will undoubtedly be the ones looking to score from the off so his chances may be more limited than last time out. However, he will be the out ball for them on the counterattack if things remain level and he is more than capable of this role with his speed and tricks. If Bayern go in front early, he will be the main danger men responsible for taking Villarreal through to the next round. A Danjuma shot on target is available for odds of 1.73.

Prediction: Arnaut Danjuma to have 1+ Shots on Target

Back the 6/1 Bayern Munich v Villarreal Bet Builder below ⬇️

Sign up to Paddy Power and get a full refund if your first bet loses. Grab an account through the offer below and place £30 on the 6/1 Bayern Munich v Villarreal Bet Builder. Here are the two possible outcomes:

How to watch Bayern Munich v Villarreal in the Champions League