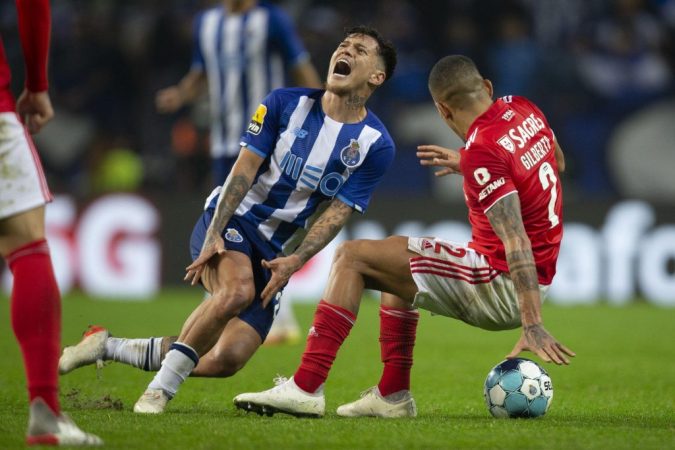 In a fitting climax for what has been a long, arduous campaign, the penultimate matchday of the 2021/22 Primeira Liga campaign will see Benfica host Porto at the Estádio da Luz on Saturday. I’ve prepared a Cheat Sheet and my top 3 Bet Builder Picks for one of the oldest rivalries in Portugal. Benfica, who are guaranteed to finish third no matter what, will close out their season next week at Paços de Ferreira – Porto, on the other hand, will host Estoril Praia before facing off against Tondela in the Taça de Portugal Final on May 22 in Jamor.

Benfica began April with a 3-2 defeat at Braga, the latest in a disappointing run of form against top sides; they lost 2-1 to Sporting in the Taça da Liga Final, lost 3-1 to Sporting in the league, and closed out 2021 with a 3-0 loss to Porto in the Taça de Portugal and a 3-1 loss to Porto in the league. Benfica would follow up the Braga loss with a 3-1 win against Belenenses-SAD, elimination to Liverpool in the Champions League quarterfinals, and a 2-0 win against Sporting on April 17, their first Clássico win of the season. They have kept three consecutive clean sheets, having since drawn 0-0 to Famalicão and beaten a 10-man Marítimo side 1-0 at the weekend.

Porto, on the other hand, also fell to defeat at Braga in April, with a 1-0 loss ending their 58-match unbeaten run in the leauge and preventing them from breaking Fabio Capello’s Milan’s record for longest unbeaten streak in Europe’s top six leagues. There is a silver lining, however; after beating Vizela 4-2 at the weekend, Porto can seal the championship at their eternal rival’s backyard with just a point.

Whilst Benfica players certainly have something left to play for – preventing Porto from celebrating the title at the Luz and forcing them to go into the final matchday with the title race up in the air – their minds are still geared towards a summer that will see PSV Eindhoven manager Roger Schmidt take charge and a fresh new start under the German manager following another trophyless campaign. Porto, meanwhile, have unfinished business and are chasing their second domestic double in three years under Sérgio Conceição.

There’s no two ways about it; Porto are simply a better team than Benfica. They have a permanent manager – Conceição as opposed to the interim coach Nélson Veríssimo – they have a better defense (21 goals conceded vs. 29) and a better attack (83 goals scored vs. 76). Take away Rafa Silva, who has provided 12 goals and 18 assists for Benfica this season and who will miss the match due to injury, and the gap becomes even more alarming.

Whether it’s individual quality, motivation, or sheer mentality, Porto have the upper hand on Benfica for this match. This is arguably the best Porto side since André Villas-Boas’ team defeated Braga in the 2011 Europa League Final in Dublin, going up against a Benfica side that are in need of a massive overhaul and that are emotionally drained from the wear and tear of the campaign. Conceição will have a first-choice team at his disposal, whilst Veríssimo will be missing his best winger in Rafa. Porto will be doing everything they can to humiliate their rivals in their own stadium and have a carefree, celebratory final matchday at the Dragão with their fans, before taking on Tondela in the Taça de Portugal Final. If Benfica lose, it will be their sixth league defeat of the campaign – since the start of 2019/20, Porto have lost just seven times in the league. Porto to secure all 3 points is available for odds of 2.15.

Otávio to Receive a Card

After winning their second league title of the past three years, and their second championship under Sérgio Conceição, Porto faced off against Benfica in the Taça de Portugal Final on August 1, 2020. The Dragons completed the double as a brace from Chancel Mbemba saw them prevail 2-1, and following the match, Otávio shouted whilst recording an Instagram live: “Chora bebê!” This means “cry, baby” in Portuguese.

This would be the start of a lengthy romance between Otávio Monteiro and Benfica’s enormous fanbase. On March 23, 2021, after Otávio pointed out that he had never been sent off in his professional career, which still stands today, a Benfica fan complained on Twitter that Otávio commits a high amount of fouls and that the only reason he hasn’t been sent off is because he plays for Porto, before inviting him to block her. Otávio responded: “1.6 fouls per game is a lot? I don’t understand you at all, and I’m not going to block you because I like to see you all crying here.”

The ‘Chora Bebê’ GIF is a common weapon amongst Portistas in their social media debates against Benfiquistas, and Otávio, like Luis Suárez, Scott Brown, and many more before him, remains a player that you love when he’s on your time and a player you hate when he’s on the opponent. He is a master of winding up the opposition and boiling piss, and the 27-year-old, who spent his childhood in Brazil before moving to Porto in 2014 and eventually playing for Portugal’s senior team, remains a controversial figure amongst opposing fans. He made his international debut on September 4 in a 3-1 win against Qatar, scoring a goal and picking up a booking, and he was thrust into the starting line-up for Fernando Santos in Portugal’s do-or-die playoffs as the Seleção defeated Turkey and North Macedonia to book their ticket in Qatar.

Since that international debut, Otávio has received a total of 13 bookings, many of which have come in high-pressure matches against teams like Atlético Madrid, Benfica, Braga, Sporting, Lazio and Lyon. His last yellow card came on April 10 in a 1-0 win against Vitória de Guimarães, meaning that, another yellow card would see him suspended for the following match. Despite that, Conceição has started him in each of the following four matches, and apart from the 7-0 thrashing of Portimonense on April 16, Otávio has played the full 90 in each of those games. Even when Porto were beating Vizela 4-2, Conceição still didn’t take him off – he is perhaps the most important player in this entire team.

Otávio has been on his best behavior for the past month, but I’m expecting him to pick up a yellow against Benfica and miss the final match against Estoril – a match that would be effectively meaningless if Porto pick up a point at the Luz and seal the title – before coming back fully rested for the cup final against Tondela. For a game like this, over 4.5 cards is basically free money, and I’d be shocked if Otávio isn’t one of the players who gets a booking. To find his way into the referee’s book comes in at odds of 2.1.

Prediction: Otavio to Receive a Card

While I’m backing Porto to win the title at the Luz, I don’t think Benfica bid their fans farewell for the season without scoring a goal. Benfica have been held scoreless in the league on just two occasions – a 1-0 loss to Portimonense and a 0-0 draw to Famalicão, two teams who set up to defend their own box and park the bus from the start of the game to the final whistle.

Benfica’s record against Portugal’s top sides this season is as follows: a 6-1 thrashing of Braga, a 3-1 loss to Sporting, a 3-0 defeat to Porto in the Taça de Portugal, a 3-1 loss to Porto in the league, a 1-2 loss to Sporting in the Taça da Liga Final, a 3-2 loss to Braga and a 2-0 win against Sporting. Only one of those games saw Benfica fail to find the back of the net – the Taça loss to Porto in December, which saw Porto fall to 10 men before the break and defend their 3-0 lead to perfection. Nicolás Otamendi would be sent off in extra time, and Jorge Jesus would be sacked in the following days. The following match saw Porto win 3-1 to end the year; when Roman Yaremchuk grabbed a goal to halve Porto’s lead, André Almeida was sent off just three minutes later to end their hopes of a comeback.

They have kept just one clean sheet in those games – a 2-0 win against Sporting which saw them take an early lead via Darwin Núñez, defend deep in their own box and hit on the counter, and prevail with three points in arguably the worst performance of Rúben Amorim’s time in charge of Sporting. Darwin was held scoreless in the following draw to Famalicão, but he opened the scoring within two minutes against Marítimo and will be looking to score his first goal against Porto in what will almost certainly be the final Clássico of his Benfica career.

Porto’s two league matches against Sporting ended up being 1-1 and 2-2 draws, and while I’m backing them to end up winning, I’m not sure their defense is good enough to keep the likes of Darwin and Gonçalo Ramos from finding the back of the net. Expect goals, fouls, and bookings aplenty in what promises to be a fiery Clássico. Both teams to find the net is available on Paddy for 1.57.

Back the 7/1 Benfica v Porto Bet Builder below ⬇️

Sign up to Paddy Power and get a full refund if your first bet loses. Grab an account through the offer below and place £30 on the 7/1 Benfica v Porto Bet Builder. Here are the two possible outcomes:

How to watch Benfica v Porto in The Primeira Liga