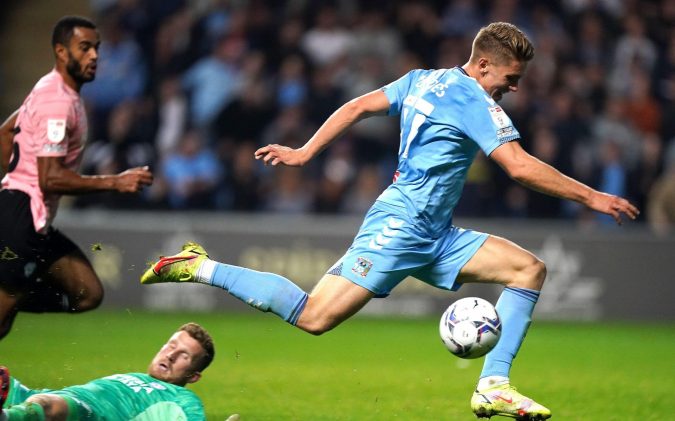 The return of the Champion’s League midweek is also accompanied by some quality English Football League action. Cardiff City vs Coventry City is one of the standout games in The Championship tomorrow night live on Sky Sports at 19:45. Coventry are looking the healthier poised of the 2 sides in 12th, however Cardiff have bolstered their previously meagre points tally significantly with a three-game winning streak prior to their last match. Now in 20th position and with less pressure on them they welcome The Sky Blues to Cardiff City Stadium with a more motivated fanbase eager to return to winning ways after a loss to Millwall. To prepare you for this clash, whether that be a combined accumulator with Europe’s finest or a single match bet builder. I’ve prepared my Top 3 Bet Builder Tips and a Cheat Sheet to keep you well informed for Tuesday’s action.

Cardiff fans will be feeling like they can finally breathe again after Forest, Barnsley and Peterborough lifted them above the 30-point threshold. It has been a far from impressive season for the Bluebirds, but credit must be given to interim manager Steve Morison for reversing their 6-game hiatus without a win into a 3-game winning streak. Now there seems to be some considerable distinction between themselves and teams circling the League 1 drain hole such as Peterborough. This has led for calls for the temporary custodian to be permanently instated following his inherited role from Mick McCarthy.

They have struggled to make their home ground a fortress this season, they have a lower loss rate away from home this season. This is potentially in part to a disgruntled fanbase who were expecting a mid-table finish or perhaps even a promotion push. Morison will be hoping for a rapturous welcome from the home crowd who’ve witnessed back-to-back home wins for the first time this season. Their 2-1 loss to Millwall last week exposed some of their defensive frailties they’ve suffered from this season even in close competitive games. With a clean bill of health for all his starting lineup, this is a game the manager should be expecting to get something from.

The visitors tomorrow Coventry, had a bright start to the season which has seen them in good stead up to now. They are comfortably positioned in mid table with 44 points to their name at this point in the season. They seem destined to remain that way as their consistency is an issue, they’ve picked up 3 wins, 2 losses and 1 draw their last 6 matches in The Championship. While this isn’t a bad run of form they’ve actually slipped down the table because other playoff hopefuls have been having even better runs of form.

A positive for Coventry fans going into this game is that their dismal away record seems to be improving. Out of their last 3 wins, 2 have come away from home. This is significant because out of their previous 12 away games they had only managed to win twice! This reverse of fortunes will be encouraging for the away support who enjoyed a 3-2 comeback against Reading last week at The Madejski. The manager Mark Robins has a 5-point deficit between his side and the 6th placed playoff spot. He’ll be looking at the very cushy fixture list ahead of him of lower league strugglers and believing that they could string together a run of results. Cardiff are included in this categorization and considering Robins oversaw a 1-0 victory in the home leg of this tie, he’ll certainly fancy his chances again.

Matt Godden will make his return to the fold tomorrow night having not played since January against Peterborough. The forward put in a man of the match performance and bagged a brace against the Posh in his last run out. He’s been absent due to recovering from having his appendix removed but should be given all clear to play ahead of tomorrow’s clash. However, he will not be a guaranteed starter for the Sky Blues tomorrow, but his teammate Viktor Gyokeres will.

The young Swedish striker has made 30 appearances this season and is their top scorer with 12 goals. Usually, he forms a 2 man strike partnership with Godden but he has found himself leading the line in his absence and has taken the opportunity on with both hands. He’s scored 3 goals in Coventry’s last 6 games which saw him leapfrog his senior striker as the leading scorer. He’s a quick, strong, and direct striker who is always on the shoulder of the opposition defenders and lurking in the box when his wingers are bombing forward. Out of the 2 he is the most mobile striker, although the appendix-less Godden might be lighter on his feet without his defunct body part, but this remains to be seen.

He’s also temporarily assumed the penalty taking duty for Coventry, who have been awarded joint 2nd most penalties with 4 this season. Cardiff are only beaten by Blackburn for being the worst disciplined side at home so this increases the likelihood of him getting an opportunity to put away a penalty. The most convincing stat I can offer you to convince you the Swede will score, is Cardiff’s horrific clean sheet record. In 14 home games, Cardiff have only managed to keep a clean sheet once. This gives them an incredible 7% rate of clean sheets at the Cardiff City Stadium this season. The young striker is on a hot run of form and relishing his time alone up top so for me he is the most likely candidate to punish the Cardiff goalkeeper and he’s available for odds of 3.3.

Mark McGuinness To Be Carded

As mentioned previously, Cardiff are only beaten by Blackburn in the disciplinary charts at home. If you’ve watched a Blackburn game this season, you’ll understand this is a credible feat. They’ve averaged 2.21 cards per game this season at home, compared to Blackburn’s 2.44. The likelihood of a Cardiff booking is increased also by the fact that Coventry’s away record is bad news for opposition teams. On the road this season they’ve convinced referees to dish out 2.36 cards to opposing teams, which places them only behind Reading for this stat.

My pick for a booking for this match is left sided centre-back Mark McGuinness. The young Irish defender is Cardiff’s most booked player this season with 6 yellow cards from 23 games. He is absent from the Cheat Sheet, but only just considering he commits 1.46 fouls per game. His bookings are consistently distributed this season which may be a coincidence but notable nevertheless. Each time he gets carded he is on his best behaviour for 2-4 games then ends up in the referee’s book again. The last time he was booked will have been 4 games ago at Barnsley, so it looks like he’s ready to return to behaving badly.

As per the Cheat Sheet, O’Hare is one of the most consistently fouled players on the opposition team with 2.82 fouls drawn per game. He’ll be playing on the right-hand side facing up against the Irishman as will Gyokeres who also draws 1.46 fouls per game. The ref in charge John Busby, isn’t shy of a card this season averaging 4.29 bookings per game. He’ll have a watchful eye on the Cardiff centre back who will have his hands full with Coventry’s tricky attackers all night. He’s available to be carded for odds of 4.0 on Paddy Power.

Prediction: Mark McGuiness to be Carded

I’ll keep this one short and sweet because it’s the safest selection from my bet builder. Coventry absolutely love a corner. They are the league leaders for corners taken this year in the Championship with 6.59 corners received per game on average. Even away from home this record stands up, on their travels they’ve received 6.50 corners per game. Their wingers and attacking players are desperate to get the ball into the box from open play which results in clearances from defenders resulting in corners.

Over 6.5 corners have landed in 86% of Coventry’s away games this season and their stats suggest they might be able to prop up this selection on its own. Lending a hand to the corner statistics are slightly less corner obsessed Cardiff, but they are no slouches of their own in this regard. At home they’ve managed 4.43 corners a game themselves this season and conceded 4.14. Over 6.5 corners have landed in 80% of Cardiff’s home games this season too, so this shouldn’t be an issue coming up against a corner mad outfit. At the risk of jinxing it, this should be a sure-fire selection on any bet builder at odds of 1.11 on Paddy Power.

Back the 17/1 Cardiff v Coventry United Bet Builder below ⬇️

Sign up to Paddy Power and get a full refund if your first bet loses. Grab an account through the offer below and place £30 on the 17/1 Cardiff v Coventry Bet Builder. Here are the two possible outcomes:

How to watch Cardiff v Coventry in the Championship