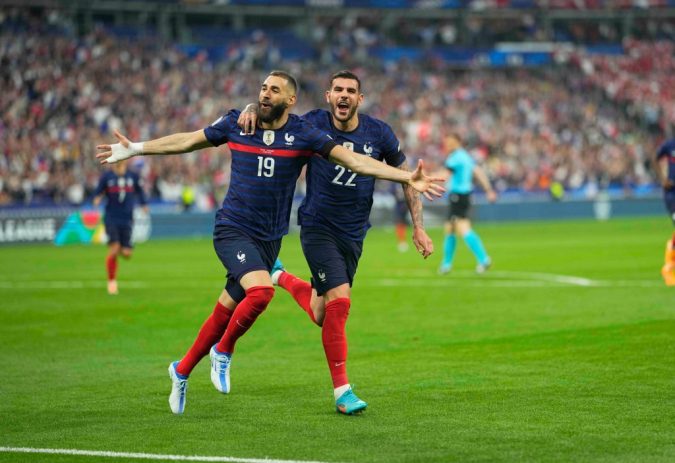 Croatia and France will square up once again in matchday 2 of The Nation’s League group stages. Just under 4 years ago these two nations went head-to-head in the World Cup final that saw a talented French squad claim victory over their underdog opponents. The stakes won’t be as high this time around but after disappointing starts to both their campaigns, both will be keen to return to winning ways. I’ve selected my top 3 Bet Builder Picks for the rehash of the 2018 final.

Croatia had welcomed Austria on a 10-game unbeaten streak in all competitions. In international football though, streaks can mean nothing without context of the opponents. In Croatia’s case, yes, they put 7 goals past Malta in one game, but they also beat and drew Russia over 2 legs, so some credit has to be given to them.

Ralph Rangnick would have been delighted to win with such an emphatic score line as his Austrian side went top of the group after winning 3-0 against Croatia. Perhaps this was an unfair score line considering Croatia applied significant pressure in the first half. This was even without their evergreen talisman Luka Modric who was partially rested following the Champions League Final. Their 2nd half performance should have signaled alarm bells in their coaches Zlatko Dalic’s head. He will be without defensive regulars Gvardiol and Vrsaljko once again so he may opt for a more pragmatic approach against Les Bleus.

France who have never been beaten by Croatia entered their home tie on even more impressive form. They hadn’t been bested in 90 minutes since November 2020 prior to hosting Denmark last time out. Karim Benzema provided another magic moment finishing off a beautiful attack to put his country 1-0 ahead. Lloris who had an excellent game, was let down by his defenders who couldn’t deal with Andreus Cornelius who managed to score twice through the middle to secure all 3 points.

The absence of veteran defender Raphael Varane who picked up a knock on Friday night, may have contributed to their defensive frailty towards the end of the 90. Similarly, Mbappe was recalled in the game over a knee issue which will mean Kimpembe and Nkunku will find their way into the starting XI. Their manager Didier Deschamps also wasn’t present for the game following the death of his father, but the Frenchman looks set to return for this clash to lead his compatriots who will be bloodthirsty after tasting defeat.

The World Cup Final between these countries in 2018 almost seems like a bygone era of football. The score line of 4-2 to France was one that I personally took for granted at the time. Now we have finals that are snooze fest chess matches with both teams terrified to lose and certainly not 6 goals for both teams. I think when these two teams come together in their modern iterations it’s impossible for them to let the neutrals down.

Since that final they’ve met twice. Both games took place in The Nations League with France securing victory both times 4-2 and 2-1. The Nation’s League has been very kind to Croatia’s attack considering their 3-0 loss to Austria was the first time they hadn’t scored in the competition. Similarly, France won The Nation’s League last year due to their goalscoring prowess and have scored in every competitive and non-competitive game this season.

Their frailties against Denmark against target man Cornelius could spell trouble for the defense tasked with Kramaric. The Croatian centre-forward is a physical striker who will be optimistic about contesting against a French defense without Varane. Similarly, France will firmly believe that Nkunku and Benzema are far superior to the Croatia backline tonight. Both teams have no trouble scoring but have had similar issues at keeping the ball out of their net which makes this good value at odds of 1.65.

Christopher Nkunku to Score or Assist

Nkunku is one of the hottest properties in football after a stellar season at RB Leipzig. He contributed an incredible 20 goals and 11 assists in just 34 Bundesliga games which has prompted the big teams in Europe to come sniffing at his release clause. He played half the game on Friday night with another man in the form of his life Karim Benzema. In 56 games in all competitions for club and country he’s amassed 52 goals and 15 assists.

The strike partners are separated by 9 years, but this clearly doesn’t affect their chemistry as the two combined last week for France’s only goal. Nkunku played in Benzema with a beautiful pass to give his senior a clear sight of goal.

He’ll be given a rare start tonight in the absence of the billion-dollar man Kylian Mbappe. This means that he’ll be playing like a man with a point to prove to his coach Didier Deschamps. The Frenchman is certainly capable of attacking output and I think he’ll be aided by lining up on the right-hand side of the attack against full back Barisic. His opponent’s defensive weaknesses have been questioned this season by Ranger’s fans after his lapses have cost them in vital games including against Celtic. France will look to exploit that via Nkunku and he’s likely to find purchase for them with odds of 2.0.

After both their respective results, you may be nervy about picking a winner between these two. However, most European teams hadn’t played a competitive game since last year so the inevitable rustiness after a long domestic season always meant the possibility of a poor showing.

It was still a competitive outing for Les Bleus against Denmark who may have thought they deserved to win against Denmark or at the very least drawn. They’ll have their manager back to guide them which I think will have an even bigger impact than the absence of Mbappe who makes way for the aforementioned talent of Nkunku.

In international football, outcomes are easier to predict as backroom staff have less impact on teams and players quality is the main determinant of victory. France boast a raft of world-class players whereas Croatia have a handful to prop up the rest of the team. I’m predicting results to go back to normal in this tie and The French to take care of business with generous odds of 2.0.

Back the 4/1 Croatia v France Bet Builder below ⬇️

Sign up to Paddy Power and get a full refund if your first bet loses. Grab an account through the offer below and place £30 on the 4/1 Croatia v France Bet Builder. Here are the two possible outcomes:

How to watch Croatia v France in the UEFA Nations League