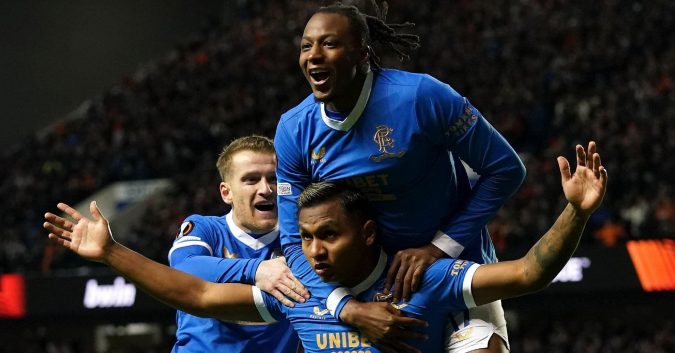 Rangers will need to switch their focus back to league action after a historic win against Borussia Dortmund in the Europa League on Thursday, as they travel to Tannadice Park to face Dundee United in the Cinch Scottish Premiership for the Sunday lunchtime kick-off.

Gio Van Bronckhorst’s side produced an outstanding performance midweek as they travelled to Germany and overcame European giants Borussia Dortmund in the first leg of their last 32 tie. Rangers played some great football with good performances all round, but the standout may be Ryan Jack who great in the midfield as his side put 4 past the German giants. However, Rangers will need to put that tie to the side as Dundee United awaits them on Sunday, with the Old Firm result a few weeks back meaning that Rangers cannot afford to slip up much if they want to retain their title over their fierce rivals.

Rangers won’t want to rest key players after their European tie as every last game and point from now is crucial in the title race. However, Van Bronckhorst will need to assess his side and see if changes need to be made to keep players fit, with Aaron Ramsey being tipped to start in the midfield as Ryan Jack may be giving a rest despite his excellent performances since returning from injury.

Moving the focus away from Rangers, Tam Courts’ Dundee United have picked up a bit of form recently having only lost 1 game in their last 7 which was away to Celtic. This spike in form came after United lost 6 on the bounce but Courts has managed to turn his side around again which has seen them climb up to 4th in the league. Dundee United beat Rangers at the start of the season at Tannadice ending the Champions 40 game unbeaten league streak so this will be no easy task for Rangers on Sunday.

I have put together 3 selections for Sunday’s 12pm kick-off coming in at around 7.24, with a pre-match Cheat Sheet and my research below

After a performance like that midweek, I don’t think it will come as a surprise that I am backing a Rangers win in Tayside this weekend. As I mentioned before, Rangers can’t really afford to drop any points as they trail league leaders Celtic by 1 point and will need to be at their best to break down the likely back 3 of Dundee united, who haven’t conceded in 4 games in all competitions.

Despite Dundee United being a hard time to break down, Rangers have scored 14 goals in heir last 4 games including hammering Hearts 5-0 on the back of their Old Firm defeat. Managing to win by 2 or more goals in all of these last 4.

The quality that Rangers have is remarkable and this is shown by being able to attract the likes of Aaron Ramsey to Ibrox. They also have immense squad depth; Rangers fielded a completely different starting squad in their Scottish Cup tie v Annan from their win over Hibs 3 days prior with great quality across the whole squad and replacements for most positions.

For these reasons I am backing another Rangers win at a handicap of -1 at 1.91 on Paddy Power.

Calum Butcher to be booked

Dundee United v Rangers is always a feisty affair with 3 or more bookings in their last 3 meetings and i expect the same in Dundee on Sunday.

Englishman Calum Butcher is well known in Scotland for being a hot headed defensive minded player and has recently made his way back into Courts’ side at centre back in Dundee United’s back 3, instead of his usual position as a defensive midfielder. Butcher has found himself getting a fair bit of criticism this season with his lack of discipline. Resulting in him seeing red once and then getting himself a 3-game suspension after the SFA reviewed his late challenge on David Turnbull which was originally just a yellow card. Butcher was handed a chance to redeem himself in a Scottish cup tie against Kilmarnock and has seen himself back in the starting line-up since.

As you can see from my Cheat Sheet below, Butcher has the 2nd most fouls committed per game and quite often gets himself into bother with the referee having seen 6 yellows and 1 red in 12 games this season with a few nasty challenges already.

If Tam Courts starts butcher on the right of the back 3 as he has done in most previous games –  He will most likely be defending against Kent who averages 1.74 fouls drawn per game. Along with another feisty personality in Alfredo Morelos who draws 1.4 fouls per game and I fancy Butcher to lose the head against this high quality Rangers attack, as he has done on many occasions for United.

Prediction: Calum Butcher to be Booked

The final selection is Rangers forward Alfredo Morelos to score anytime, the striker is thriving under new management at Ibrox having scored 10 goals in 12th appearances under Van Bronckhorst and he will be vital in keeping Rangers title hopes alive, but I’m sure this is a challenge that he will relish. Morelos’ talent has often been somewhat overshadowed by his poor attitude but there is no doubt he has outstanding ability in front of goal and it looks as if Van Bronckhorst knows how to keep him in line and get the most out of the Columbian.

Rangers were without a few attacking options in Germany with Fashion Sakala and Kemar Roofe unavailable and are still a doubt for Sunday so Morelos will more than likely lead the line again for this one.

Morelos is the top goal scorer in the Scottish Premiership alongside Ross County’s Regan Charles-Cook with 11 goals in 21 appearances. Morelos has scored in his last 3 matches in all competitions and is proving his quality both in the league and in Europe as he scored his 28th goal in the Europa league.

Morelos looks good on the Cheat Sheet too with 1.72 shots on target per game and 5.16 shots, the quality his teammates possess means that he will undoubtedly get efforts at Benjamin Siegrist’s goal and I fancy him to tuck one away.

Back the 6.24/1 Dundee United v Rangers Bet Builder below ⬇️

Sign up to Paddy Power and get a full refund if your first bet loses. Grab an account through the offer below and place £30 on the 6.24/1 Dundee United v Rangers Bet Builder. Here are the two possible outcomes:

How to watch Dundee United v Rangers in the Scottish Premiership