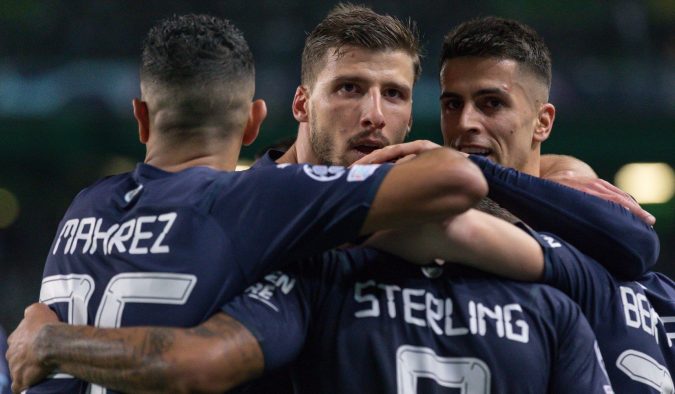 The Champions League returns on Tuesday night as Manchester City host Atletico Madrid at the Etihad, as the quarter finals of the Champions League gets underway. This will be the first ever competitive meeting between these sides, so it is unfamiliar territory for both, but Pep Guardiola and Diego Simeone have some previous history.

Atletico have already had the beaten of the other half of Manchester this season, narrowly edging them in their previous matchup in the Champions League. Man City got the job done in their first leg against Sporting and cruised passed their Portuguese opponents to get to the quarters.

Man City are undefeated in their last 7 but faced a temporary scare from Liverpool at the weekend, falling from the top of the table for the first time since October but soon regained their one point lead after coasting past a poor Burnley outfit.

Atletico haven’t lived up to last seasons triumphs as they tried to defend their La Liga title, they currently sit in 3rd, 12 points behind their fierce city rivals. They are however, enjoying a nice run of form, winning 6 on the bounce in the Spanish top division.

Pep Guardiola was open on his disappointment in Kyle Walker’s silly suspension in the last round of Champions League games, the Englishman will go on to serve his final match ban here so will be unavailable for selection. Ruben Diaz and Cole Palmer are also unavailable for the Citizens. Atletico’s Yannick Carrasco also serves a ban with Gimenez and Hector Herrera the only other absentees for Atletico.

I have created a bet builder for this mouth-watering Champions League clash, currently sitting at around 8.55 on Paddy Power. Take a read of my research below along with a pre match cheat sheet.

Stefan Savic to be Shown a Card

The first of my four selections is Stefan Savic to be booked, the Montenegro centre back will return to the Etihad for the first time since winning the league under Mancini, playing a small role at the beginning of Manchester City’s recent success.

The Atletico centre back is pretty hot headed for both club and country and should line up on the right of the Atletico back 3, meaning that he will likely have Sterling or Grealish running at him. At the age of 31, Savic certainly has plenty of experience, but I think he will find it tough against the pace and skill of the Man City front line.

Savic has picked up 7 yellows in La Liga this season, with 4 bookings in his last 6 games in all competitions showing the aggression he has. Savic averages 1 foul per game but we could see him give more away with the likes of Sterling or Grealish on his side. Savic will need to watch his temper here as referee Istvan Kovacs has averaged 5.33 yellow cards in the Champions League.

Atletico average 2.13 yellow cards per Champions League game this season with a total of 17 so far, along with 3 red cards. They have committed the 3rd most fouls as a team in this seasons Champions League campaign so I think there will be a few bookings at the Etihad, with Savic’s potential opponents I think he will be one of the players in the referees book on Tuesday.

Prediction: Stefan Savic to be Shown a Card

Manchester City will look to take an advantage to the second leg at the Wanda Metropolitano so I expect them to come out looking for that lead right from kick off. Man City have exceptional quality all over the pitch and Atletico could find this out the hard way in their first competitive meet up.

Man City have won 5 and drawn 2 in their last 7 games in all competitions so arrive in good form for this Champions League clash. Man City have dominated their last 3 games, having at least 18 shots in each of these and have had an impressive 17.1 shots per game in their Champions League fixtures too. In all competitions, Atletico have an average of 1.1 xG against them with only 1.42 xG themselves, whereas Man City have an xG of 2.2, with City also only conceding 0.81 goals per game.

In the Champions League, Man City are the second highest scorers and average an impressive 2.88 goals per match! They have also dominated previous games with an average possession of 59.5% of the ball so I am backing them to take control in this tie too and get the win.

Kevin De Bruyne to have 1+ Shots on Target

Kevin De Bruyne has again been a key part of Man City’s success this season and proves to be one of the world’s best midfielders. De Bruyne has scored 2 in 2 including a brilliant goal against Burnley at the weekend, so will go into this one with confidence.

The attacking minded midfielder never shy’s away from a shot. He averages 3.12 shots per game with 42 of his last 75 shots coming from outside of the area showing he likes a go from range. Atletico often force long range shots due to their defensive tactics. Man Utd had 4 shots from outside the area in the last round against Atletico, so Pep may look to De Bruyne for his long-range expertise.

De Bruyne finds the target from 38.7% of his shots in all competitions and is often found in good shooting positions due to his outstanding positional awareness, making him a huge threat.

Atletico have averaged 4.1 shots on target conceded per game in this seasons Champions League, and will be up against De Bruyne’s Man City who average 6.4, so De Bruyne should have a few chances at Oblak’s goal.

Prediction: Kevin De Bruyne to have 1+ Shots on Target

As I mentioned, Man City will want to go to Madrid with the advantage so we should see a classic attacking performance from Pep against Simeone’s Atletico Madrid who will try to keep City out with their defensive tactics which may force corners from the hosts.

Man City average 8.5 corners per game in the Premier League with the highest count so far, they currently have 31 more corners than anyone else in the league. In the Champions League, the Citizens have averaged 7 corners per game so they shouldn’t struggle to get corners here. Man City have also had at least 6 corners in each of their last 6 games in all competitions.

It’s hard to compare Atletico’s La Liga corner stats to a game against Man City as no team currently has that attacking quality in the Spanish division that City possess. We have seen Atletico concede corners in games away from home in the Champions League this season, conceding 5 or more corners to Liverpool, Porto and Man Utd so I think that Man City will manage to get the corners needed for this selection.

Sign up to Paddy Power and get a full refund if your first bet loses. Grab an account through the offer below and place £30 on the 7.55/1 Manchester City v Atletico Madrid Bet Builder. Here are the two possible outcomes: