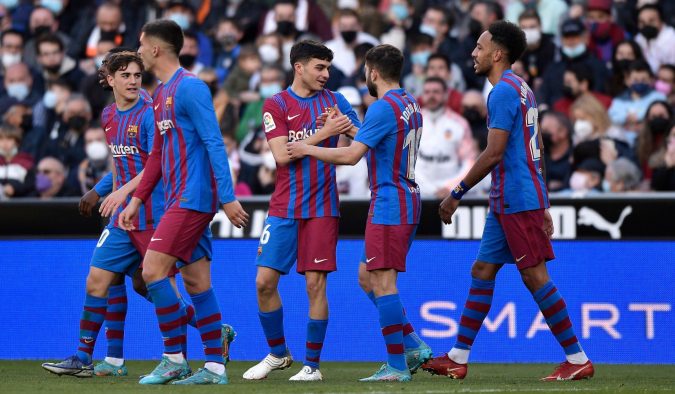 Thursday night sets the stage of an incredibly tense second leg between two huge names in European football, Napoli and Barcelona. Despite Napoli not being able to qualify for this season’s Champions League and with Barcelona crashing out, the silver lining for us is that they present us with an incredibly attractive fixture in the Europa League.

The first leg has set this game up to be an incredibly exciting encounter, as it finished 1-1 at the Camp Nou with a spot in the next round still up for grabs for both sides. Barcelona would’ve been disappointed not to have come away with a victory, as they were the dominant side for the majority of the game. They achieved 21 shots compared to Napoli’s 4, however The Catalans were only able to muster five of those on target. After going away and reflecting on their performance, they will aim to be more clinical in the second leg as they have already proved that they can control the game against Napoli.

Both sides have a fair few injuries, which can hamper both of their preparations for this fixture. Barcelona have the likes of Dani Alves, Ansu Fati and Memphis Depay unavailable to them, with a handful more of the squad being injured. Napoli find themselves in a similar position, as they will have to do without first-teamers such as Hirving Lozano and Stanislav Lobotka. With neither side being at full strength, they should still be able to compete at the highest level and provide a competitive fixture for us to watch.

Barcelona managed to get the better of Napoli not too long ago, as the sides faced each other in the Champions League during the 2019-20 season, with Barcelona winning 4-1 on aggregate. With both sides now finding themselves in the Europa League, Barcelona have never managed to win this competition and have not participated in it since it rebranded from the UEFA Cup. They have reached the Semi-Finals four times in the UEFA Cup, and they will hope to win the competition this season to restore any pride that was lost from exiting the Champions League. Napoli won the UEFA Cup all the way back in the 1988-89 season, so they will be looking to make the most of the opportunity they have this time around to win the trophy for the first time under the Europa League name.

Have a look at my bet builder selections and the Cheat Sheet below and enjoy some Thursday night action.

Despite the fact that Barcelona are slowly trying to build their way back up to their best, I believe that the squad they currently have is more than good enough to win this competition. The faith I have in the rising Barcelona youngsters and the recent additions that they have made to the squad, means that I’m backing them to win the game in 90 minutes.

As outlined in the introduction, Barcelona absolutely crushed Napoli in the first leg, but weren’t able to put the tie beyond doubt. The staggering difference between their 21 shots to Napoli’s 4, outlines the fact that Barcelona have cracked the tactics to be able to take advantage of their Italian opposition. Because of this, I’m expecting Barcelona to turn up on Thursday night with a much more clinical approach to the first leg and establish their dominance in the fixture.

Barcelona are in a brilliant position for this game. After coming off a 4-1 victory against Valencia in the league at the weekend, they are in prime goalscoring form, discovering their clinical finishing that they lacked in the first leg. With their goals consisting of precise and fluid passing and movement, they are starting to regain their mojo and the level of quality that is instilled in the Barcelona DNA. Bringing this confidence into the second leg and playing football that they are enjoying, it looks like things are starting to click for this Barcelona side that have been less than impressive in recent seasons.

Napoli aren’t coming into the game with the best of form, but it could be worse. They have two draws in their last two league games, showing that they have struggled to take advantage of their opponents. After rescuing a 1-1 draw in their last league fixture, this ensured that they were able to take points from Caligari, who are in the relegation zone. This makes it seem like Barcelona are in a much better position to win the match.

Pierre-Emerick Aubameyang to have 1+ Shot on Target

With Barcelona in a good spell of form, this is down to one man who has been a catalyst for recent victories. Pierre-Emerick Aubameyang has proved to be an incredible acquisition for Barcelona. The 32-year-old has slotted into the starting lineup perfectly and seems like he is enjoying his football and feeling comfortable in the Barcelona team. Because of this, I’m expecting Aubameyang to shine again on Thursday night, and have at least one shot on target.

After taking a large pay cut to join the side from Arsenal, it shows Aubameyang’s desire to be a part of a side that he wholeheartedly admires. In his short Barcelona career so far, he has averaged 2.59 shots per game, diverting 1.94 of those on target, showing his eye for goal. This contributed massively during his last fixture, where the Gabon international managed to score a hat-trick in Barcelona’s 4-1 win. This means that Aubameyang will be exuding confidence after slotting into the team so quickly and coming straight into a purple patch of form.

Looking at the matches that he played for Arsenal in the first part of the season, he managed to produce similar stats of an average of 2.86 shots per game and 1.39 shots on target per game. That equals a shot on target rate of 48.5%, which I expect him to equal or improve on, as he now finds himself in a team where his morale has received a huge boost.

After Barcelona have improved on their build-up play which was showcased brilliantly in the last league fixture, this will lead to more chances being created that Aubameyang will undoubtedly snatch up during this period of superb form. With Barcelona’s dominance over Napoli proved in the first leg, I expect Aubameyang to be in the middle of the action on Thursday night.

Prediction: Pierre-Emerick Aubameyang to have 1+ Shot on Target

Diego Demme to be Booked

With recent form suggesting that Barcelona could get advantage of Napoli in the second leg, I’ve identified where I believe where one of Napoli’s weak links will potentially be. With the home side managing a large amount of injuries, this has led to Diego Demme stepping into the side, taking the place of Anguissa and Insigne (a recent doubt). Being catapulted into the first team, no fixture has more importance than playing Barcelona. There is a possibility that Demme will be desperate to impress in order to try and establish a solid first team spot. Not only this, but the nerves that players can have when facing the European giants can be quite intimidating.

On average, Demme commits an average of 2.64 fouls per game. This has led him to pick up four yellow cards in the league, which is quite a handful considering that he isn’t always a guaranteed starter when there are no injuries. Already being quite hasty with his challenges, he will be under a large amount of pressure on Thursday night, as he will come up against a selection of Barcelona players with a great amount of talent.

As per the Cheat Sheet below, Barcelona have a total of eight potential starters that draw over two fouls per game. As Demme will be positioned in the centre of midfield, he may come up against Pedri, Busquets and Gavi who all draw a handful of fouls per game. With the German maybe being required to assist in his defensive duties, I expect Demme to pick up a card in this fixture.

With the referee giving out an average of 4.6 yellow cards per game, I’m expecting Demme to be one of the victims of the referee as he may find himself in the book after a couple of fouls, as the amount of cards that the ref averages shows that he has little patience.

Prediction: Diego Demme to be Booked

Back the 8/1 Napoli v Barcelona Bet Builder below ⬇️

Sign up to Paddy Power and get a full refund if your first bet loses. Grab an account through the offer below and place £30 on the 8/1 Napoli v Barcelona Bet Builder. Here are the two possible outcomes:

How to watch Napoli v Barcelona in the Premier League