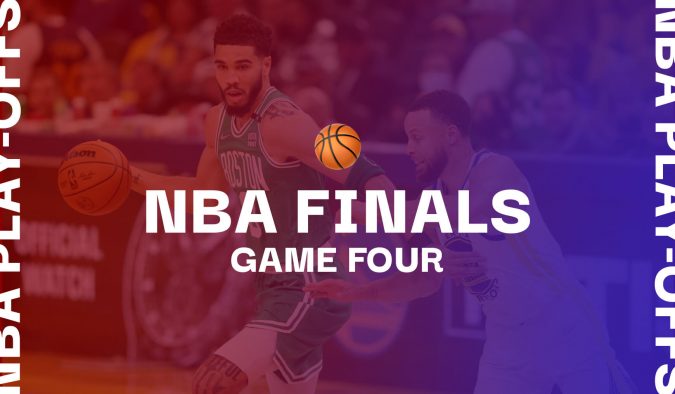 The Boston Celtics took care of the home court advantage in Game 3 as they once again used a stellar fourth quarter to put away the Golden State Warriors. They allowed only 11 points in the last frame to claim the 2-1 series lead. The Celtics could really put the pressure on the Warriors with a win in Game 4. They are four-point favorites, similar to what the spread was in Game 3.

Don’t look past the Warriors bouncing back and finding a way to tie up this series at two games apiece tonight. Similar to the Celtics, the Warriors have yet to lose back-to-back games during the playoffs. A Warriors victory could give them home court advantage right back in what would then be a best-of-three series to decide the NBA Champion. If you decide to bet on either side, make sure to monitor the health of Stephen Curry who seemed to get hurt late in the last game.

Scoring in the paint has been the Celtics bread and butter so far in this series. Their length and size are causing problems for the Warriors frontcourt. The Celtics have outscored the Warriors 110-92 in the paint and have outrebounded them 129-112 through three games. The Celtics continue to lead all playoff teams in defensive rating, while the Warriors lead in points per game.

Game 3 was almost a perfect slate for our three bets. We hit the Jayson Tatum and Marcus Smart Over’s before the end of the third quarter. Unfortunately, Klay Thompson played as if it was Game 6 and scored 25 points, while making five 3-pointers in 39 minutes. Playing at home in the playoffs has been hit or miss for the Celtics, but they looked awfully good in Game 3. The Warriors NBA record of 26-straight playoff series with a road victory is in jeopardy in Game 4.

Even though the Warriors have been outrebounded by 17 from the Celtics, Andrew Wiggins has averaged six rebounds per game in this series. During the playoffs, Wiggins has recorded five or more rebounds in 17 of their 19 games. When he plays 26 or more minutes, Wiggins has covered this over in 12 of 16 playoff games. He is averaging 35.3 minutes per game this series.

All signs point to Wiggins continuing to dominate the glass for the Warriors. They need him to, going against this very big and talented Celtics frontcourt. Wiggins has also been the primary defender on Jayson Tatum so his playing time is not an issue. Outside of Game 1, Draymond Green’s rebounds have plummeted and Stephen Curry doesn’t seem 100% while on the court either. Kevon Looney continues to crash the glass, but he is only playing 21 minutes per game.

Expect Wiggins to play 35 or more minutes tonight. He has done that in seven of his last nine games. The only two he missed was Game 2 that ended in a blowout, and Game 4 against the Dallas Mavericks which was the only Warriors loss of that series. He doesn’t provide much from an assist standpoint. Wiggins’ game is scoring and rebounding the ball. His scoring prop of 16.5 points was intriguing, but I would rather attack his rebound prop since it has hit so much lately.

Stephen Curry has been fantastic in this series. He is averaging 31.3 points per game while shooting 48.5% from the field and 48.7% from behind the arc. Curry is even providing with his peripherals averaging five rebounds, 3.7 assists, and 2.7 steals per game. The consistency that he has shown, makes him the MVP of the NBA Finals already if the Warriors find a way to win it.

Curry claims he is going to play in Game 4, but I don’t believe he is anywhere close to 100% after Al Horford rolled up on his ankle towards the end of the third quarter in Game 3. There are several Curry under props that I am interested in, but the one that stands out the most is his under 5.5 rebounds. This is kind of a nice parlay in itself with the Wiggins over 5.5 rebounds. Since Curry was injured going for a rebound, don’t be surprised if he lets others crash the glass.

Curry has hit the under 5.5 rebounds in 14 of his 19 playoff games, which is good for a 73% hit-rate. He didn’t start early in the Warriors playoff run, but when he did start, he still hit the under in 10 of those 15 games and has recorded the under in two of the three games during the NBA Finals thus far. With the Celtics starting such a big lineup, Curry’s chances are diminished.

Curry has averaged 9.3 rebound chances per game in this series, which ranks as the third worst starter among the two teams. As far as the entire playoffs are concerned, Curry is averaging 9.4 per game. During the regular season against the Celtics, Curry averaged three rebounds per game. This is not the matchup for a 6’2” point guard to rack up several rebounds, especially when he is dealing with a nagging injury. This feels like the safest bet on the board tonight.

Last but not least, we get to a Celtics player prop with Derrick White over 10.5 points. Ever since White started for the injured Marcus Smart in Game 4 of the Western Conference Finals, he has played exceptionally. During that seven-game stretch, White is averaging 13.9 points per game while shooting 42.9% from the field and 40% from downtown. Room for improvement.

Even with Smart and the rest of the Celtics fully healthy, White is still seeing solid playing time. He has averaged 28.7 minutes per game in the NBA Finals and has yet to top 40% shooting from the field. White has only one game where he failed to have a 20% usage rate, which was Game 3 where he finished with 19%. Also, over that seven-game stretch, White has gotten over this 10.5-point prop in five of those seven games. This line feels too low for how he is playing.

Finding available usage on a team with Jayson Tatum and Jaylen Brown can be difficult, but White has found a groove with the second unit off the bench. He ranks fourth over the last seven games in both drives and touches per game, also behind Marcus Smart. He will more than often close games out as Robert Williams will go to the bench due to a small-ball lineup.

Through three games, White is averaging 11 field goal attempts per game which is more than any other playoff series thus far. He has been very aggressive and does have seven made 3-pointers combined. In Game 3, the Celtics had things wrapped up pretty early and White didn’t play his best game. He finished with seven points in only 24 minutes as Williams was fantastic, especially when Draymond Green fouled out. Trusting White to get over this seemingly low line.

Sign up to Betfair and get a full refund if your first bet loses. Grab an account through the offer below and place £20 on the 4/1 Boston Celtics v Golden State Warriors Bet Builder. Here are the two possible outcomes: