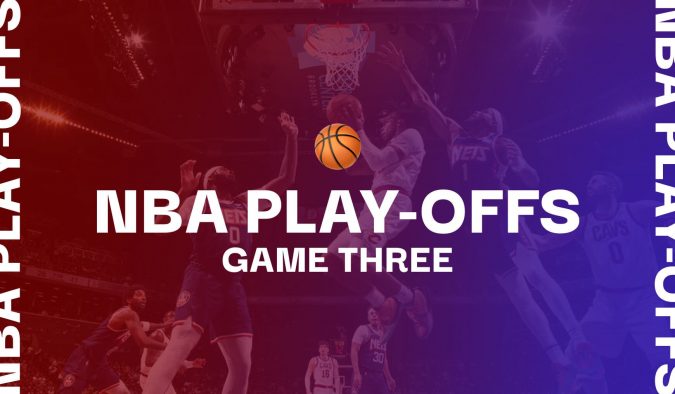 With the NBA Playoffs Finals tied up at one game apiece, this series shifts venues to the TD Garden for Game 3 tonight. The Boston Celtics and Golden State Warriors have yet to lose back-to-back games during the playoffs. That gives the distinct edge to the Celtics in Game 3 as they are 3.5-point home favorites. In fact, the Celtics have only lost back-to-back games once since January.

Even with that edge, the Celtics have a 5-4 record when playing at home in these playoffs, which could be a problem against this Warriors team. Winning on the road in the playoffs has been the Warriors greatest strengths. They have won on the road in each of their last 26 playoff series, which is an NBA record that goes back to 2013. The first two games of this series have been very different. This series could easily go the distance, which is what we all want to see.

Game 1 may have been the best game during these NBA playoffs. The Celtics outscored the Warriors 40-16 in the fourth quarter. They had a 17-0 run during that stretch that put the game away for good and shocked the home fans. Normally that is the Warriors going on that type of scoring avalanche, but this Celtics team is an extremely talented group with a ton of fire power.

The Warriors bounced back in a big way in Game 2 behind a monstrous third quarter. They outscored the Celtics 35-14 as they led by 23 points going into the fourth quarter. Many starters for both teams sat out the fourth quarter as the Warriors won by 19 points. Winning by blowout has been the most common trend during the NBA playoffs. Both teams are fully healthy, so let’s hope we get a great Game 3 tonight. Now let’s dive into these prop bets and win some money!

Despite a Celtics come from behind victory in Game 1, Jayson Tatum had a poor performance. He shot 3-for-17 from the field, which was the second-lowest percentage he has had all season. Tatum finished with 12 points, but did have a career-high 13 assists. He followed that up with a better Game 2 where he had 28 points and three assists. We’re looking at his assists tonight.

This is a bet that I wouldn’t mind taking an alternative line on. However, I’m comfortable sticking with Tatum’s over 5.5 assists in this three-bet player prop parlay. The emergence of Tatum’s game during this playoff run has been fun to watch. During the regular season Tatum led the Celtics with 11.4 drives per game. He has increased that number to 13.5 per game during the playoffs. He also led the Celtics in usage rate during the playoffs and the regular season.

Tatum has had very similar numbers regarding his potential assists. He averaged 8.7 during the season and that number has climbed to 11.9 during the playoffs. The ball is in his hands much more often and Tatum has shown an all-around game being a fantastic facilitator. He may finish as the game leader in points tonight, but he can easily get over this 5.5 assists prop line as well.

Since coming into the league, Tatum has increased not only his scoring but his assists and rebounds in every single season. This is a great spot for the Celtics to bounce back after a lackluster Game 2. The Warriors have allowed 116.3 points per game on the road compared to 103.5 per game at home. Their defensive rating also drops from 107.5 at home to 119.1 on the road. Expect the Warriors defense to continue adjusting to Tatum making him be a facilitator.

Another Celtics over that I am going to take tonight is Marcus Smart over 13.5 points. He has scored 14 or more points in five of his last seven games and in 11 of his 17 playoff games, which is good for a 64.7% over hit rate. Smart is averaging 14.9 points per game during the playoffs, which is third on the Celtics behind Jayson Tatum and Jaylen Brown to no surprise.

Smart stepping up in the playoffs is what he does best. Over the last three seasons, Smart has increased his scoring in the playoffs compared to the regular season by an average of 3.0 points per game. He has been more aggressive shooting the ball due to teams over helping on Tatum and Brown leaving Smart wide open on the perimeter. Smart’s usage rate has jumped from 18.3% to 20.8% during the playoffs. He will be given plenty of opportunities to hit this over.

The Warriors also do a poor job defending the 3-point line. They rank 14th out of 16 teams when it comes down to 3-point field goals attempted and made by their opponents in the playoffs. This is where Smart can capitalize as 58.8% of his field goal attempts come from long distance. He is tied with Brown averaging 6.6 3-point attempts per game which is behind Tatum’s 8.3 per game. Do not be intimidated by Smart’s two points in Game 2 as the Celtics got steamrolled and he only played 25 minutes. Tatum and Brown were the only two starters who scored more than two points during that entire game. The minutes for Smart are also very secure even with Derrick White playing out of his mind. Robert Williams is the player who is most likely to get squeezed as the Warriors will continue to go with their small-ball lineup with Draymond Green at center

After missing all of last season and over half of this season with an injury, Klay Thompson came back struggling. During the regular season, Thompson shot a career-low 42.9% from the field and 38.5% from behind the arc. He has increased those numbers a little bit for his postseason run, but not much better. It has been tough sledding for the 32-year-old veteran shooting guard.

For the first two games of this series, Thompson is shooting just 32.0% from the field and 27.7% from downtown, while averaging 13.0 points per game. He has failed to record 19 points in five of his last seven games. Thompson is notoriously known for his elite Game 6 performances. He continued that trend last series as he had 32 points in the closeout Game 6 against the Dallas Mavericks. Take that game out, he is averaging 12.4 points per game over his last six games.

Relying on his bread and butter jump shot has been Thompson’s calling card throughout his career. When his shot isn’t falling, the Warriors are deep enough where they can go straight to their bench with the emergence of Jordan Poole. Thompson’s average usage rate over his last seven games is 22.2%, which is a big step down from his 29.7% usage rate during the season.

As you can already tell, I am leaning towards the Celtics taking this game tonight. This is a bet against Thompson, not the entire Warriors offense. Stephen Curry can easily light this team up like he has been doing the first two games. However, blowouts during this postseason have also been very common, so don’t be surprised of another one in Game 3. Regardless of a blowout or not this Thompson under looks promising even if he plays 35+ minutes. Lock in this juicy parlay.

Sign up to Betfair and get a full refund if your first bet loses. Grab an account through the offer below and place £20 on the 15/2 Boston Celtics v Golden State Warriors Bet Builder. Here are the two possible outcomes: