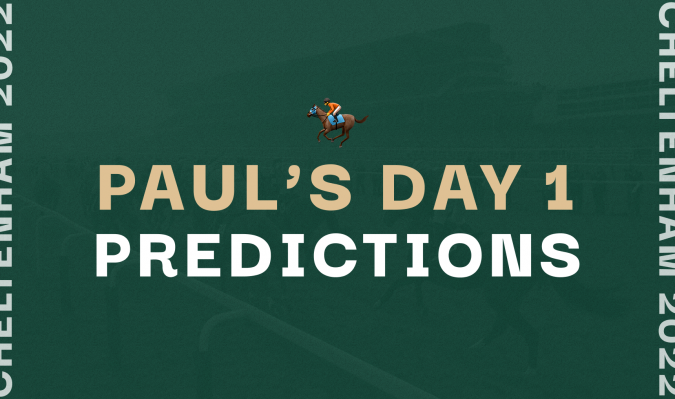 Second in the Champion Bumper last year to Sir Gerhard who is bound for the Ballymore this year, it took Kilcruit three starts to get off the mark over hurdles but with the addition of a first time tongue tie last time he did it with the minimum of fuss. He looks a naturally slick jumper and with slight question marks over one or two in the race in that department I think his jumping will really stand to him and he can run a big race in the opener.

This looks like a brilliant renewal of the Supreme Novices and the one I’m siding with to get us off to a good start is Mighty Potter, trained by Gordon Elliott. He’s coming into this race a little under the radar I feel, even though he’s won a Grade 1 at Leopardstown at Christmas time. Some people are knocking the form of that win, but I think this race will really suit him as the faster they go early in this, the better for him as he’s plenty of stamina and so I would expect him to come home strongly up the hill. He looks a decent each way bet in what should be a cracking race to kick start the Festival.

Paul has picked out the following bets for Race 1 👇🏼

It looks like a wide-open Arkle this year with plenty of horses looking to have some sort of chance. I feel that Riviere D’Etel will turn the form around with Blue Lord based on their run at Leopardstown at the Dublin Racing Festival, and so that would leave her with every chance here of getting back to winning ways on what would be trainer Gordon Elliott’s first success in the race.

One I like at a big price e/w is War Lord. Although he has plenty to find with Edwardstone judged on their run at Sandown earlier in the season, he did go on to win at Lingfield on his latest start and I’d expect him to be ridden to finish off strongly here and he could pick up the pieces late on to at least claim a place.

Paul has picked out the following bets for Race 2 👇🏼

The first handicap of the meeting and it’s no surprise that it looks a hard race to find the winner, but I like two against the field in it.

I’ll start with Grumpy Charley who I feel the step up again in trip may bring out some more improvement. He finished behind Bravemansgame at Newbury last time on his first try at nearly 3 miles.  Although he has limited chasing experience with only the three runs to his name, he’s lightly raced, and I’d expect more to come from him over this longer trip.

Corach Rambler is my second selection and there’s plenty to like about the looks of him. He was a winner over course and distance back in December and was unlucky to unseat his rider at Ascot last time when sent off favourite. He’s improved plenty this year and I’d be surprised if he didn’t have

Paul has picked out the following bets for Race 3 👇🏼

A fascinating Champion Hurdle awaits us, and Honeysuckle is going to be sent off a short priced favourite but she must face horses in here that she hasn’t before and one of those is my selection, Appreciate It. It’s a big ask for a horse to win any race on their first run of the season let alone a Champion Hurdle, but if any trainer is going to do it, it’ll be Willie Mullins. He was a wide margin winner of the Supreme Novices last year and the reports leading up to this race are that he’s been working very well at home. Honeysuckle is the one they all must beat of course but at the price she looks too short to me and I’m happy to take her on.

Paul has picked out the following bet for Race 4 👇🏼

Appreciate It to Win Outright

A very competitive Mares Hurdle this year and the likeliest winner to me here is Stormy Ireland. She won the Relkeel Hurdle on New Year’s Day at over course and distance and I’m not sure any other horse in this would’ve been able to do the same, that looks like a really solid performance. She was runner up to Roksana in this race back in 2019 but she’s held her form pretty well since and the fact she’s a front runner, I think that’ll help her get into a nice rhythm early in this and she may well prove tough to pass.

The e/w value in the race for me looks to lie with last season’s Pertempts winner Mrs Milner for the Paul Nolan yard. We’ve only seen her twice this season, her seasonal debut was a winning one at Limerick before she was beaten in a Grade 2 contest at Newbury. They’ve kept her fresh for a repeat festival win and I’d be disappointed if she wasn’t in the thick of things coming to the last hurdle.

Paul has picked out the following bets for Race 5 👇🏼

The first of those being HMS Seahorse, again for trainer Paul Nolan. This horse has had three starts over hurdles and his jumping has improved noticeably each time. The form of the race he won last time at Fairyhouse has worked out well and I think he can run a big race off a nice weight.

Champion Green is the second selection. It took him four goes to win his first hurdle race, but I think the better ground helped him get his head in front and I’d expect the ground to help him even more at Cheltenham. Rachael Blackmore takes the ride and I think he’ll run a solid race in what is a very competitive affair.

Paul has picked out the following bets for Race 6 👇🏼

A small field to end Day 1 and I’m siding with Run Wild Fred for top amateur Jamie Codd, who has a great record in this race. He’s been a very consistent horse, finishing runner up on his latest start in the Grade 1 Novice Chase at the Leopardstown Christmas Festival behind Fury Road and before that he was an impressive winner of the Troytown at Navan. He’s generally a solid jumper and the fact he’s a second season novice coming in here I think that’ll stand him against some more inexperienced rivals. Interestingly he’s never ran at Cheltenham before, but I don’t think that will do any harm to his chances.

Paul has picked out the following bet for final Race 👇🏼

Sign up to Paddy Power and get a full refund if your first bet loses. Grab an account through the offer below and place up to £30 on any horse on Day 1 of the Cheltenham Festival. Here are the possible outcomes if you if you back any horse on Day 1:

How to watch Day 1 of the Cheltenham Festival