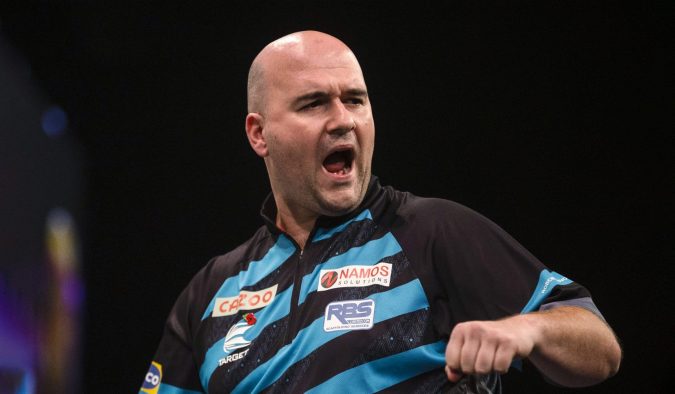 The final darting action of 2021 takes place at Ally Pally with another double session as the Last 16 concludes ahead of days break on New Years Eve. Once again our darting expert runs his eye over the six matches.

Day 13 of the Championships is on Thursday 30th December

The Aussie, Raymond Smith will be a surprise package to many at this years event having qualified for this through the DPA qualifier.

His performances have been tremendous and consistent however. He defeated Tipton thrower Jamie Hughes 3-1 in the opening round and built on this in the next round by beating the number twenty eight seed, Devon Petersen 3-0 in Round Two before a comfortable 4-1 victory over the impressive German Florian Hempel in the last round.

Whilst many will say he’s had quite an easy route to get here his performances have been consistent, averaging 93 or 94 in each match. You also have to consider that Hughes threw a 96 average back against him in Round One. He’s been clinical at business end of legs too with a checkout efficiency of 47.83% on his doubles.

He faces his toughest assignment to date here in twenty-one seed Mervyn King. He’s averaging less for the tournament than Smith at 92.36 but he too was efficient in his third round 4-0 victory over Steve Lennon, who up until that match had looked very good himself.

He dodged a bit if a bullet in his opening round victory over Ryan Joyce, coming from two sets to down to win 3-2. Joyce looked unstoppable early on despite King playing relatively well. A combination of Kings consistency and Joyce’s standard dropping dramatically caused the turnaround and this represents a real opportunity for King in a wide open Quarter of the draw.

This has the makings of a tight game where the best finisher on the day comes out on top.

The way these two have progressed to this stage couldn’t have been more different.

What’s remarkable about the campaign of Soutar is that he’s trailed to all three opponents at some point or other and survived eight match darts against Suljović and one match dart versus De Sousa.

His tournament average is 89.62 and his doubles percentage is 31.58%. He’s determined and dogged alright but his luck just may run out this afternoon.

Rydz on the other hand has been massively impressive. Both his latter matches should’ve been close contents on paper but he turned both into processions. Whilst Dolan performed well against him he was ruthless in taking almost every opportunity that came his way.

Similarly, Aspinall was clinically disposed of too but he was nursing an injury and despite downplaying this after his previous round victory over Joe Murnan, it was more problematic than first appeared.

In all three matches he’s closed out the victory with impressive finishing, something Soutars opponents up to this point have not been able to do. He’s won 19 of the 20 legs when he’s had the throw this week and I don’t see Rydz giving Soutar the opportunities his previous opponents have.

Both these players have reached this stage by virtue of just one victory apiece, each against the Rodriguez brothers.

Dobey defeated Rusty-Jake Rodriguez in the final second round match 3-2 with an average of 92.68, coming from two sets behind to win. He struggled to find his normal 180 prowess during this game, hitting just two late on to help him complete the comeback. He was due to meet MVG in the third round but as we all know now, he tested positive for Covid so Dobey received a bye.

Similarly the scheduled opponent of Humphries in the last round, Dave Chisnall also tested positive for Covid ruling him out if the event. Prior to this Luke defeated Rowby-John Rodriguez 3-0 in the second round with a 92.91 average and once again with just three 180’s, way below what we know he’s capable of.

Humphries twice a Quarter-Finalist in this event has the better record at Ally Pally and reached the final of the UK Open, one of four finals he’s lost this year. Dobey on the other hand will be reaching unchartered waters in this event with victory here. He’s had a good year too though, winning two titles on the floor.

The head to head suggests there’s not much to choose between them either. It’s one apiece this year and 4-3 overall to Dobey. The pace of this match should really suit each other and although I slightly favour Humphries to prevail, take both players to hit 6 or more 180’s in a potential seven set thriller.

Prediction: Both Players to Throw 6 or More 180’s

Back the Darts AFTERNOON treble below ⬇️

Wade is another player to have benefited by a scheduled opponent testing positive when Vincent Van Der Voort had to withdraw.

That means he’s reached the Last 16 here on the back of one under-par performance against Maik Kuivenhoven who he defeated 3-1 despite an average of just 83.74, hitting no 180’s and a less than impressive 34.62% record on his doubles.

A wins a win however and I’m sure if anybody can move on from such an underwhelming victory then Wade’s your man. He’s a three time Semi-Finalist in this event, the current UK Open and the Worlds aside he’s won pretty much everything there is to win in darts.

Kleermaker is here following three victories. He beat both John Michael and Simon Whitlock 3-1 then survived an almighty comeback from Joe Cullen to win 4-3, having led 3-0 he looked the likely loser in the seventh and final set before a 130 finish turned the game back in his favour. What’s notable about his opening victories is how quick he’s got away and set a foothold in his games. In Wade he faces a competitor who knows how to get the job done. I think the pace of Cullen assisted in getting him over the line where the slower pace and experience of Wade may go against him. In a wide open section of the draw expect the real James Wade to turn up and lay down his title credentials.

Both of these come through last set deciders in the previous round to be here but the performance by these two couldn’t have been more different.

Anderson defeated Ian White 4-3 but he trailed 3-0 and averaged just 90.31 for the match. He struggled to get going and a his average for most the match was below 90. He also survived a match dart from his opponent too.

Cross on the other hand was stunning from start to finish as was his opponent Daryl Gurney who was equally as good and pushed Voltage all the way. In contrast Cross averaged 99.77 and his average was flirting around and above the 100 mark for much of the game. He complete a majestic 170 outshot to claim victory.

Both players also beat legends and come through a tough opening match. Anderson defeated previous back to back World Champion Adrian Lewis 3-1 whereas Cross defeated Raymond Van Barneveld by the same Scoreline. Both players lost the opening set in these matches but ran out emphatic winners afterwards.

On recent form you’d have to favour Cross who’s been nothing short of outstanding in the second half of the season whereas Gary’s never quite hit the heights we’ve been accustomed too from him in 2021. He could turn up and put in a master class and he reached the final last year without being at his best but I’m going to form man to run out the winner here, probably 4-2.

This is a repeat of the recent Players Championship Finals in which ‘Snakebite’ came out on top 11-10.

Once again Wright tinkered with his darts against Damon Heta and looked in all sorts of trouble when trailing 2-0 in a race to four. He then reverted to his tried and trusted gold darts before rattling off twelve of the next fifteen legs to comfortably win 4-2, hitting 60% of his doubles.

The problem is following that match he suggested he would try another set of darts against Searle here to keep him interested, something I continue to struggle to get my head round considering the greatness you see from him at times.

If he does and things don’t work out then he could be in all sorts of trouble against ‘Heavy Metal’ Ryan Searle who’s one of the rising stars of the game.

A winner on the floor this year plus a further three runner-up spots in the Players Championship he’s enjoying a good 2021. His success in the twenty second Players Championship event of the year included a victory over today’s opponent in the final just to prove he’s got the game to cause an upset here.

His record at Ally Pally the last few years and comfortable victories and steady performances against both William Borland and Danny Noppert suggest to reach this stage he’s at ease on this big stage. It’s a tough game to call and I wouldn’t be surprised to see an upset but go for plenty of sets in this one.

Back the Darts EVENING treble below ⬇️