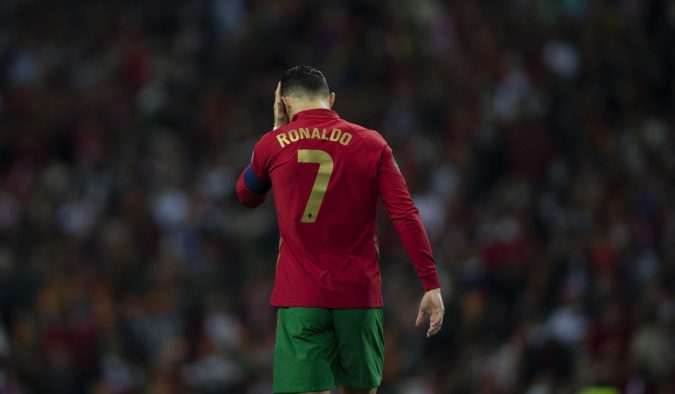 It’s a massive night in Porto as Portugal take on North Macedonia at the Estadio do Dragao in the World Cup playoff final, with the winner guaranteed a spot in Qatar later this year. This one looks to be a thriller on Tuesday night as North Macedonia look to provide another upset, but Cristiano Ronaldo and Portugal stand in the way of that spot at the 2022 World Cup.

North Macedonia are only one win away from their first ever World Cup after knocking out Euro 2020 winners, Italy, thanks to a late winner from Trajkovski. The goal came late on after North Macedonia manged to keep Italy out of the net despite the Italians dominance throughout the 90 minutes. North Macedonia have beaten both Italy and Germany in the last year so they should not be underestimated by Fernando Santos’ side.

Portugal dominated their first playoff match against Turkey in the first half before Yilmaz brought his side back into the game just 20 minutes after the break, the hero soon became the villain though as the veteran striker smashed an 86th minute penalty over the bar before Portugal sealed the victory with a stoppage time winner.

This is the first time that these sides will take each other on competitively and it looks to be a great contest with Portugal being the obvious heavy favourites, North Macedonia could potentially produce one of the greatest World Cup playoff fairy tales in history though as they have their eyes on Qatar.

I have put together a bet builder for this World Cup playoff final, take a read of my research below along with a pre match cheat sheet to help with your bets.

Cristiano Ronaldo to have 2+ Shots on Target

This could well be Cristiano Ronaldo’s final appearance at a World Cup so he will be determined to lead his country for one last dance in Qatar.

Ronaldo wasn’t at his best against Turkey last week, with Turkey being able to nullify Ronaldo and keep him quiet for the majority of the game. The Portuguese striker still had moments of magic though and even on a quiet night he still managed to hit the target twice, he also missed a golden opportunity to get his name on the scoresheet in the last minute.

Despite being 37, Ronaldo still has that burst of pace to beat opponents and get in behind which allows him opportunities at goal. He also still has plenty skill with the ball at his feet so even when he does have opponents in front of him, he more often than not finds a way past them. Perhaps his most dangerous talent these days is aerial presence, which we saw against Spurs the other week when Ronaldo guided his header into the top corner.

Ronaldo has stepped up on the biggest of occasions so many times in his career for club and country, with the danger of him maybe not being present at the next World Cup, I think he will produce for his country on Tuesday. He also averages over 2 shots on the cheat sheet for his country and if Portugal show anything like the dominance that Italy did the other night, they will not struggle to test the goalkeeper, with Italy registering 32 shots against North Macedonia last time out!

Prediction: Cristiano Ronaldo to have 2+ Shots on Target

Ezgjan Alioski to be Shown a Card

This is a huge occasion for both sides, and we could see a few cards coming out because of this as both sides look to play at the biggest tournament of them all. The player I am backing to get booked is Ezgjan Alioski as I expect the hot-headed, ex Leeds man to be right up for this occasion as he tries to get his team over this final hurdle and get them on that plane to Qatar.

Alioski put in a few dirty and late challenges when he was faced with dealing Berardi against Italy last week, the Macedonian wing back was lucky to avoid going in the referees book fouling his Italian opposition 3 times throughout the game.

Alioski quite often swipes at opponents legs if they get away from him and with the pace and skill of Otavio he could get himself into the book if he isn’t careful. Alioski will also have the task of keeping Ronaldo at bay which of course is one of the toughest tasks a defender can be given, the North Macedonian backline did well as Italy peppered their goal last time out and it could be a similar situation against Portugal with their major quality all over the pitch.

We saw throughout his days at Leeds some of the dirty challenges that Alioski put in, as well as the Euros where he picked up 2 yellows in North Macedonia’s 3 games which shows his capability to lose the head on the big stage. It has been no different since he has made his move to Saudi Arabia with the winger picking up 6 yellow cards for Al-Ahli so far this season.

Prediction: Ezgjan Alioski to be Shown a Card

The versatile Portuguese attacker has been on fire this season, scoring 13 goals in the Premier League. Jota goes into this one having scored in 3 consecutive games in all competitions including his spectacular header against Turkey last time out as he beat the keeper at his near post.  Despite only being 5.8 ft, Jota’s heading ability is outstanding and often is overlooked but he has scored a range of goals this season from close range and long range .

As I mentioned, Jota goes into this in fine form and will have some of the world’s best feeding the ball into him in a game where his side are huge favourites so he should be presented with a few opportunities at goal.

Jota missed a couple of sitters against Turkey which any other day he would’ve buried, these came from a whipped in cross where Jota met the cross but fired over the bar from within the 6-yard box, the other golden opportunity came when Jota had an open goal after running on to a fantastic goal kick which caught the Turkish keeper off his line, in which he fired wide. This just shows the chances that Jota gets in both a Liverpool and Portugal shirt and he is more than able to bury them as we have seen so many times this season.

Back the 10.06/1 Portugal v North Macedonia Bet Builder below ⬇️

Sign up to Paddy Power and get a full refund if your first bet loses. Grab an account through the offer below and place £30 on the 10.06/1 Portugal v North Macedonia Bet Builder. Here are the two possible outcomes: