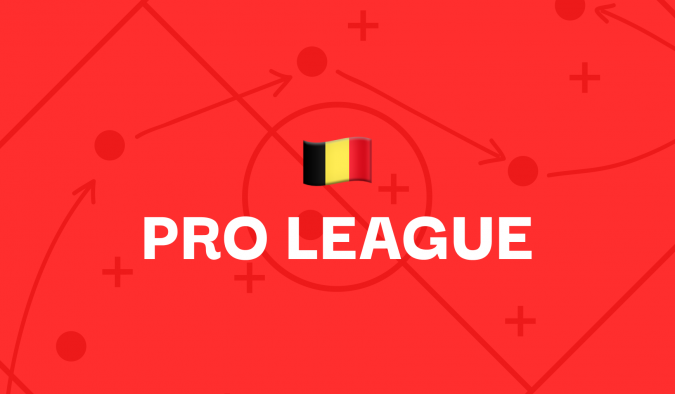 The first game of Sunday in Belgium sees current Pro League champions Club Brugge visit Liege’s Stade Maurice Dufrasne to face Standard. Brugge sit third in the table, seven points behind newly-promoted Royal Union Saint-Gilloise at the top, and level with second placed Antwerp with this game in hand. Antwerp have been in good form lately, and continued this with a 2-1 victory over Oostende. Brugge know that with such a large gap to a team in great form, and rivals pushing them all the way, they cannot afford to drop any points, not least against teams in the bottom half.

Standard Liege are right in the centre of the midtable, sitting 14th, three places and five points above the relegation play-off spot, and six places and eight points off the final Europa League play-off spot. Unable to put a consistent run of form together all season, Liege have taken some scalps, but have mostly been beaten by the best teams in the division, of which Brugge are certainly a part.

Most of Brugge’s dropped points this season have come in the aftermath of their Champions League group games, and having finished bottom of Group A, they will now have a clear run to challenge for the title. They comfortably beat Sint-Truiden 2-0 last weekend, and I expect they will do similar today. Brugge have scored in 10 of their 11 away matches this season, winning three of their last five. Liege have played host to some of the lowest scoring games in the league, meaning taking the lead, as Brugge often do on the road will likely be crucial. Liege have seen fewer games with over 1.5 goals than any other side in the league, just five times all season, with over 2.5 landing just three times, the fewest in the league in both raw numbers and percentage terms (3 games, 33%).

Brugge are heavy favourites for this game, and it is easy to see why. They are eager to keep up the chase and minimise the points deficit they may face ahead of the play-offs, whilst Liege have taken just four points from 15 available, losing three times. Their sole win came with a 3-2 victory having been playing against 10 men for the second half, and despite a creditable draw last weekend, Brugge should have enough to get the job done.

Runaway league leaders Royal Union Saint Gilloise are next up on Sunday, following the conclusion of second-place Brugge’s fixture. They host Genk at the Stade Joseph Marien in Belgium’s capital city, Brussels. Chasing their first First Division league title in 87 years, Les Unionistes will be facing a tougher test this week than they did last week, but as their seven point advantage after half a season proves, few teams have been able to stop them. Union SG have dropped just eight points out of their previous 45, and returned to action with a 4-0 demolition of second-bottom RFC Seraing.

They play host to Genk, current occupants of the final Europa League play-off spot in eighth place. The team in blue and white, sometimes known as The Smurfs, returned to action following the winter break with a 4-1 victory over bottom of the table Beerschot, and could definitely pose a tough test for the league leaders, however, they have won just two of their previous eight away games, losing five of these. With a total of seven points taken from 24 available, there is little to suggest that Genk are able to lay a glove on their table-topping opponents.

Union have been defeated three times in the league this season, with two of these coming against second and third placed Club Brugge and Antwerp respectively. The other defeat was something of a freak result, where midtable OH Leuven won 3-1 away from home, scoring with exactly half of the shots they had, and stealing a win despite Union dominating the game. That 3-1 loss is their only defeat in 13 league fixtures, in which time they won 11 of these 13. They have been comfortably the best side in the league this year with no-one else coming close to their level of consistency, and another win is to be expected here.

Both sides are missing regular starters through suspension, with Union’s Jonas Bager, their right-sided centre-back out for this and the next game following a straight red card, whilst Genk have midfielder Kristian Thorstveldt out for the trip to Brussels. Neither of these absences should be overly crucial, although Union are slightly thin at the back, so an injury to one of their three central defenders could create an issue for them. Despite this minor worry, I struggle to see any other result than a Union win, and with the form they have been in all season, any time they are as high as 1.91 to win, it is almost always worth putting them into your betslip.

KV Mechelen host Anderlecht in the tea-time game on Sunday, the Purple & White making the short trip north of the capital city Brussels to the city of Mechelen. Anderlecht arrive in overall good form, although Vincent Kompany will have been disappointed by his side’s failure to put away a poor Standard Liege side in their first game back after the winter break, with a 1-1 draw an underwhelming result for a side hoping to join the race for first alongside Club Brugge and Antwerp. Mechelen however are no pushovers, and they currently lie in seventh place, just six points behind the visiting side in fourth.

Coming into this fixture, Anderlecht are unbeaten in eight games, and have lost just once in their last 15, however they have often been unable to actually win these games, managing seven wins and seven draws in these other 14 matches. This is what has cost them a real chance at chasing down Union SG at the top of the table and why they are 11 points off the top despite remaining unbeaten. They will want to pull away from the teams in the Europa League play-off places, and hope to close the gap at the top of the table to potentially enter the play-offs with a chance of winning the title, and will be keen to get three points on the board and get their second half of the season underway in the manner they would have wanted to last weekend.

Goals look to be the best selection for this fixture. Mechelen have hosted 11 games this season, and they are solidly above the league average for both over 1.5 goals and over 2.5 goals. Where the frequency of high-scoring games really becomes apparent is that they have seen six of their 11 games finish with over 3.5 goals scored, two more than the league average, a feat only matched by Zulte Waregem in the league this year. Anderlecht meanwhile have seen over 2.5 and over 3.5 goals land in six of their last seven away games, which no team in the league comes close to competing with. Within this run there are games which have finished 7-0, 5-0, 2-2 (three times) and 3-1. Anderlecht can provide the goals single-handedly, or can see both teams scoring owing to their leaky defence. They have kept just three clean sheets on the road all season, and Mechelen have only failed to score once at home in 2021/22.

Both Teams to Score looks to be the best option available in this fixture. Anderlecht tend to keep clean sheets only in games against the league’s worst sides when they can really dominate, and their attack has scored more than any side, besides Union SG at the top of the table. In their last 15 games, the two sides have scored in 13 and 14 of them respectively, well above the league average and a feat that few teams in the league can match.

Cercle Brugge have, almost from nowhere become one of the form teams in the division. Having started the season employing a variety of formations with three at the back, they have transitioned into playing with a back four, and then the appointment of Dominik Thalhammer has allowed them to charge up the table. Since his appointment, Cercle have lost just once, a spirited 3-2 defeat away to league leaders Union SG, in which they led 2-0 at half-time. Cercle returned to Pro League action last weekend with a comfortable 2-0 win over Eupen, and they will now have the Europa League play-offs firmly in their sights, sitting just four points below Genk in eighth.

The visitors, Zulte Waregem, are just one place above the relegation play-off spots in sixteenth, just four points above RFC Seraing. They have won their previous two fixtures which has lifted them above the newly-promoted side and taken them level with fellow stragglers Oostende. They will hope to keep themselves at an arm’s length from the two sides below for the rest of the season, and though Beerschot really do appear doomed already, Seraing are a win away from being right on their tails again.

Waregem having their game postponed last week must be taken into account here, whilst Brugge will be back into the routine, their visitors have not played in almost a month and will likely be somewhat rusty. Their form on the road is also nothing to shout about, having won just one of their last seven games. Cercle meanwhile have lost just once under their new manager, to the side top of the league by seven points, and have won all three of his home games, scoring seven times and conceding just once. He has been able to mould the team into an efficient attacking force, and a solid defensive unit, seemingly out of nowhere. On this run under the new coach, they have kept four clean sheets from seven, and have scored at least twice in every game.
No team would want to face Cercle right now, and Waregem are exactly the sort of team you would expect the form side in the league to dispatch with ease, especially with the confidence that the Green and Blacks must be feeling right now. Anything other than a Cercle win would be a massive shock here, and though they are reasonably heavy favourites, 1.5 is still a good price and worth adding to the betslip.

Back the 6/1 Accumulator on Betfair ⬇️

Sign up to Betfair and get a full refund if your first bet loses. Grab an account through the offer below and place £20 on the 6/1 Belgian Pro League Best Bets Accumulator. Here are the two possible outcomes: