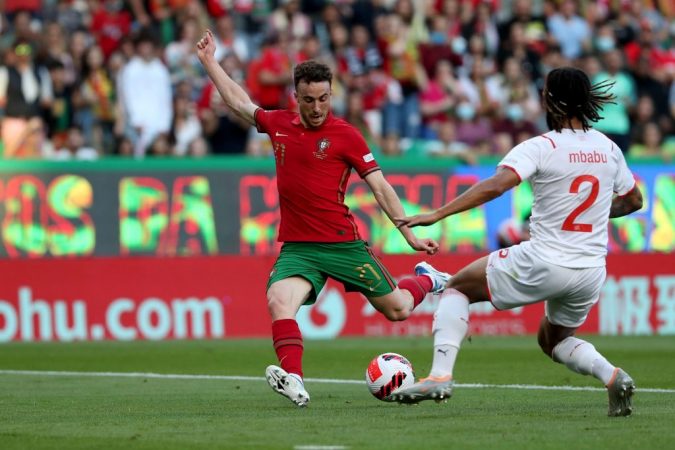 League A strugglers Switzerland will be happy to check out of this half of Nation’s League fixtures and forget their disappointing end to the season. Their guests Portugal will be in higher spirits leaving for the holidays after an unbeaten run has seen them top the group. Portugal made light work of The Swiss in the home leg just a week ago and Switzerland fans will be praying that their team have learned a lesson from the embarrassment. I’ve selected my top 3 Bet Builder Picks and sorted a Cheat Sheet to get you prepared for Switzerland’s attempt to salvage their pride.

3 games 3 losses and a single goal from their Nation’s League campaign does not make good reading for Swiss football fans. While never expected to launch a significant group winner campaign, their uninspired performances have disappointed even the most unoptimistic fans. However, their most recent performance against Spain which saw them narrowly lose 1-0, was a more competitive showing especially in the 2nd half.

Initially there were concerns about the health of the Swiss backline after Schar and Elvedi were out of the squad, but it seems their gun-shy attack is of greater concern. There will probably be rotation in the frontline once again from Murat Yakin. He will be hoping home advantage will finally kick in for his team, who’ve only won 1 out of their last 5 Nation’s League home games.

Portugal will look to effectively wrap up their place in The Nation’s League finals with a win over Switzerland tonight. They’ll enter the match with a clean bill of health, suspension free and on a fine run of form. They will be travelling slightly lighter with some players being given leave from the travelling squad such as Ronaldo, Guereirro, and Moutinho. This shouldn’t be cause for concern for manager Fernando Santos who has strength in depth with these positions.

Their 4-0 victory was a cakewalk for the Portuguese against Switzerland who offered very little after Fabian Schar’s disallowed opening goal. It will be interesting to see if Portugal’s winning approach will change from their last meeting and if they have taken their foot off the gas heading into the final game.

Portugal will likely be without their most recognizable son, Cristiano Ronaldo. This is reflected in the bookmakers’ odds which place Portugal above evens to beat a team they beat by 4 goals only a week ago. In defense of these odds Ronaldo did score two of these, but he is not as sorely missed these days when not playing.

Rafael Leao, Jota, and Andre Silva are all capable of filling the hole the former Ballon D’or winner leaves in this team. There can also be the argument made that they are actually beneficial to the team by adding more dynamism in the middle of the park to complement the energy Portugal provide out wide.

Looking at his two contributions against Switzerland last time seem to agree with this sentiment. He was able to reap the rewards of his teammates great play to roll in the ball twice by being in the right place at the right time. Even the freekick that led to William Carvalho rebounding in, was poorly dealt with by the Swiss goalkeeper rather than being outright dangerous. His numbers still remain commendable, but I think the gap left by him is not as large when looking a little closer.

Switzerland will have to focus on providing a more enthusiastic attacking performance and I think part of that will be using their fullbacks attacking strengths in Rodriguez and Mbabu. Getting them forward to bolster the attack could play right into the hands of Portugal’s wingers who have been devastating this campaign.

Portugal have only failed to score once in their last 10 games in all competitions and this will be a worry for a leaky Swiss backline whose recent clean sheets came against the not so mighty Lithuania, Northern Ireland, and Bulgaria. Portugal don’t look like slowing down and Switzerland don’t look capable of putting the brakes on them. I think they’re generously priced at odds of 2.1 to secure all 3 points.

There can be made a reasonable claim made that Xherdan Shaqiri is to Switzerland what Cristiano Ronaldo is to Portugal. Albeit on a smaller scale, no pun intended, he is still Switzerland’s talisman, free-kick taker, and most recognizable attribute. The midfielder now plies his trade in The MLS for Chicago Fire which is unsurprising given his maverick status. However, at 30 years old some may still think he has enough to offer in Europe’s top leagues.

As per the Cheat Sheet, he averages 0.88 shots on target per game. This is from an attempted 2.37 efforts on average per match. I’m expecting Portugal to dictate the play similarly as in their 4-0 win, but Shaqiri can overrule this domination. A large majority of his efforts come from outside the box, and he was on target the last time these two met. Shaqiri doesn’t need to break down defensive lines and only needs a spare yard to have an effort from outside the box.

For the national side he is significantly more accurate too, almost twice as accurate in fact. There can be several conclusions drawn from this but looking at his efforts from range at Chicago Fire I think he holds more respect for his national teammates than he does in The States when shooting from range.

He shares the free-kick and penalty taking duties with left back Ricardo Rodriguez which adds extra opportunities to this selection. He was also on target against Spain with a long range free-kick in their last game which suggests he is the man entrusted with set pieces currently.

The extra value in this selection comes from the gun-shy strikers ahead of Shaqiri. Seferovic, Embolo, and even the normally lively Okafor have been reluctant to pull the trigger partially due to their lack of service but also confidence seems low up front for the target men. Shaqiri will probably be more inclined to shoot in the absence of any real attacking output ahead of him and I think he is good value to get one on target similar to his last two starts with odds of 2.2.

There have been over 3.5 cards in every fixture these two teams have played this Nation’s League campaign. This obviously includes the reverse fixture between these two which saw 5 cards dished out between them. Switzerland in their last fixture against Spain managed to get that 4 themselves without their opponent’s help. They’re clearly desperate to secure their first points of this leg of the campaign, and that is turning into frustration and bookings on the pitch.

One thing that will aid this selection is that almost none of the players that will line up will be at risk of suspension when the tournament resumes in September. That means players will feel less wary about risky tackles and not have to walk on eggshells in front of the ref. For Portugal’s players there will be some squad rotation for bench players to try and nail down a starting spot. This means they’ll likely be playing with a higher intensity than normal which could see them fall foul of the ref.

The ref in question is a disciplinarian in his native Croatia. As per the Cheat Sheet, he dishes out an incredible 6.33 yellow cards on average per game. He’s only given out less than 4 yellow cards once in his last 10 competitive games. This was in fairness a San Marino match who he probably felt guilty about booking after they took on a characteristic thrashing by Poland.

Both teams will want to win this, so I’m expecting there to be several clashes contesting the result. The stats, the ref, and the occasion all point to a good number of cards being handed out. For 4 or more cards to be handed out is available for odds of 1.67 on Paddy Power.

Back the 9/1 Switzerland v Portugal Bet Builder below ⬇️

Sign up to Paddy Power and get a full refund if your first bet loses. Grab an account through the offer below and place £30 on the 9/1 Switzerland v Portugal Bet Builder. Here are the two possible outcomes:

How to watch Switzerland v Portugal in the UEFA Nations League