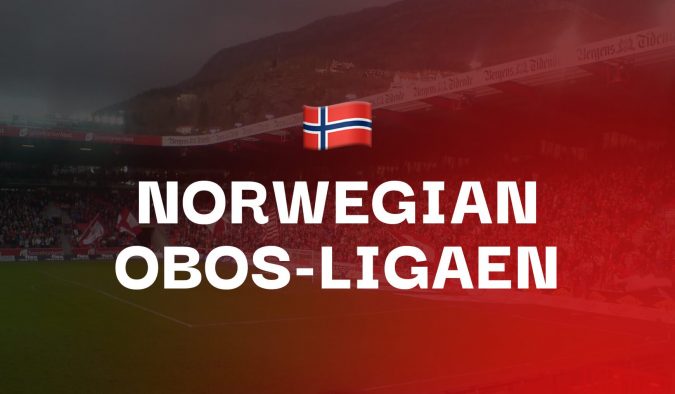 It has been a very mixed period for Sogndal recently. It feels like they have been an ‘all or nothing’ type of side with 4 wins and 4 draws in their last 8 matches. Sogndal are 6th in the table which is an acceptable position for this fully professional club. Reaching the playoffs is a realistic and ambitious enough target. 7 of the last 8 Sogndal matches have contained over 2.5 goals and 9 of the last 10 both teams scored. They are mid-ranked in terms of xG and xGA metrics. Their goal difference of just +1 with 20 goals scored and 19 conceded would also suggest they are of upper midtable capability. It’s no surprise that Sogndal are managed by a former striker in Tore Andre Flo. This is the first head coach role for the ex-Chelsea man, and he has brought an exciting brand of football to Sogndal. Icelandic winger Jonatan Ingi Jonsson has been their key player this season scoring 5 goals and also weighing in with 4 assists. He has been a great winter transfer form Icelandic club FH.

Travelling here are a Fredrikstad side currently out of form after going five games without a win. They are down in 10th place which is a disappointing spot for this fallen giant of Norwegian football. They reached the playoffs last year and a similar ambition must be the minimum objective for 2022. They are currently 7 points adrift of those however, albeit with a game in hand. Fredrikstad drew 2-2 with Åsane on Monday but really should have won the game. They were 2-0 up but blew that advantage outgunning their opponents 2.94 to 1.52 on xG. It is impressive that FFK have the 6th best xG average per 90 mins out of any team in the OBOS Ligaen (1.61) but they have only converted that into 16 goals which is a couple below what is expected. Nicolay Solberg leads their scoring charts with five goals, and he wouldn’t be out of place at Eliteserien level. At the other end of the field Fredrikstad have the 4th worst average xG per 90 mins which is a worrying statistic. They have been fortunate to only concede 16 times, although their 0-6 embarrassment in the Norwegian Cup vs Brann shows how vulnerable they can be defensively.

Several factors point towards plenty of goals being scored in this match. Sogndal are a magnet for overs and both teams scoring this season whilst Fredrikstad matches also don’t generally lack for goals either. Backing over 2.5 at a decent enough price of 1.57 looks like the best bet. Both teams scoring is also very likely here but those odds of 1.44 don’t represent as much value. I am expecting an end to end type match and the 4-4-2 vs 4-3-3 attacking systems facing each other should yield plenty of mis-matches. A 2-1 or 3-1 victory to either team looks quite likely, or even a high-scoring draw can’t be ruled out.

It is quite ridiculous how lucky Åsane have been recently. They have picked up 10 points from their last 6 OBOS Ligaen matches but they are without doubt one of the worst teams in the division. On Monday they fluked a 2-2 draw vs Fredrikstad despite getting battered 2.94 to 1.52 on xG. They have taken their chances well and somehow limited their opponents enough to pick up some points. In a league which is known for lots of goals and terrible defending they are ranked as the worst team in the league for overall xG per 90 mins (1.85). To be leading that metric is quite concerning and defensively they are very porous. At the other end of the field their xG per match of just 0.90 is the 2nd worst out of anyone. They have massively overachieved this statistic though and scored five more goals than expected. It has basically saved their skin and masked how poor they really are.

Travelling here are a KFUM Oslo side going well in 5th place. They have been a very consistent side in the last four seasons, finishing in the top eight positions on all occasions. Consecutive playoff defeats in the previous two campaigns have only fuelled their hunger more this year. KFUM have some of the best metrics in the division and have the 5th highest xG average 1.66 per 90 mins. They have converted that into 22 goals which is one of the most of any team. At the other end of the field, they have an xGA of just 15 but have been unlucky to concede 21 times. This is a legitimate team who have every right to think they are a playoff or even a promotion contender this season. They head into this match on the back of a 3-2 victory vs Sogndal last week. They raced into a 3-0 lead before being pegged back but dominated the match statistically 2.62 to 0.75 on xG.

KFUM Oslo are priced at 2.10 to win this match which actually look very generous odds. They are by far the better team and should be able to add to their three away victories. However, Åsane are one of those sides who have been very lucky recently and have a knack of scoring goals out of nowhere. A better and perhaps safer selection looks like KFUM Olso to score over 1.5 goals at 1.80. Facing statistically the worst defence in the league in terms of xG metrics, this should be a great chance for them to fill their boots and net at least twice. KFUM do not lack for goals and have scored at least twice in 4 of their last 5 games, mostly against better opposition than this. I am fully expecting a comfortable away win but just in case Åsane keep things close the team total on visitors looks like the best option.

Stabaek are one of the best teams in the OBOS Ligaen and should consider themselves as having a great chance of finishing second behind Brann this season. They have only lost one game of football in 2022 and it has only been a glutton of draws which have cost them so far. Stabaek are 3rd in the standings on 23 points. They have the 3rd best xG in the league (22.08) but only converted that into 18 goals. They also possess a legitimately mean defence, statistically the best which has only conceded 6 times. Stabaek have kept a mammoth 8 clean sheets in 12 games and their most recent win, a wild 4-2 vs Mjøndalen was a very rare example of their defence being breached on multiple occasions. Talented young manager Eirik Kjönö has created a watertight backline using his 3-4-3 formation. The defence mostly consists of players who would certainly compete in the bottom of half of the Eliteserien. It contains the likes of Nicolai Naess and Simen Wangberg, who are very experienced campaigners. Young fullback Sturla Ottesen is highly rated and chipped in with two goals and two assists this season.

Stabaek face a Stjørdals-Blink side who are desperately struggling this year and find themselves bottom of the table. They survived via the playoff last season under the guidance of talented young English manager Tom Dent, but this campaign has been a desperate struggle. Blinks have won just one game all season and lost 8 times out of 12. They have scored the fewest goals out of any team (11) and also conceded 23 at the other end. Their miserable xG of 1.13 per match demonstrates that they haven’t been unlucky, they just simply lack firepower. The only positive for Stjørdals-Blink heading into this fixture is that they have a better away record. In fact, all their 6 points obtained have been on the road. However, this is going to be a really tough test for the semi pro outfit facing one of the top teams in the division.

Stjørdals-Blink lost 0-3 at home to Start on Monday and they had to play most of the second half with 10 men after goalkeeper David Paulmin was sent off. They didn’t have a keeper on the bench, so striker Sondre Stokke had to go in goal for the last 40 mins. Backup Rasmus Sandberg should be fit after illness to take the gloves here, but Blinks also have off the field distractions and are rumoured to be in financial trouble. The club have asked every player to cut to a minimum wage salary but two regular defenders Havard Lorentsen and Mathusen Sandrakumar rejected the offer and have now been released by the club. Stabaek should easily win this match and the best bet looks like taking the home team on a -1 handicap. This covers the 2-0 scoreline but I am expecting a greater margin of victory. Stabaek sometimes lack goals, but they really should fill their boots in this fixture. It is the perfect time to be facing such a poor Stjørdals-Blink outfit and they should win with plenty to spare.

Sign up to Betfair and get a full refund if your first bet loses. Grab an account through the offer below and place £20 on the 7/2 Norwegian OBOS Best Bets Treble. Here are the two possible outcomes: