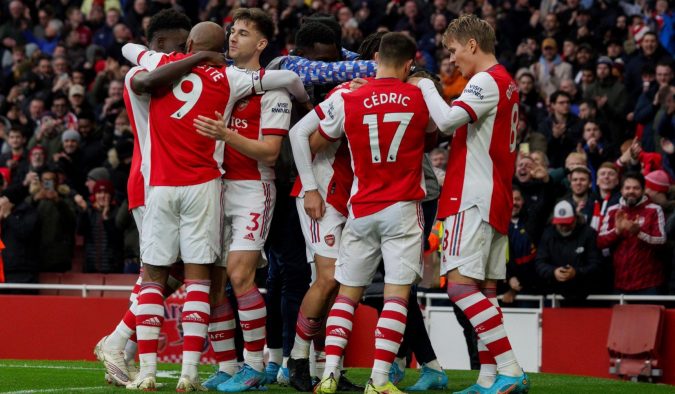 Sunday’s Premier League action kicks off with a London Derby, as Arsenal make the short journey to face Watford at Vicarage Road. Arsenal will be seeing this game as one that is theirs for the taking, as picking up three points will be a non-negotiable task, as they aim to carry momentum to achieving a top four place in the league. Watford, on the other hand, desperately need the points. Slumped in the relegation zone, they need to start producing results in hope for survival.

Arsenal are currently 6th in the league, but their position is looking quite comfortable. They are level on points with 5th place with three games in hand, and they are only two points away from 4th place. This places them in a good position to charge on during the last stretch of the season in an attempt to bring Champions League football back to The Emirates. Watford are currently in 19th in the table, with their situation looking quite miserable. They are two points adrift from bottom, whilst also being three points away from safety. Their survival chances are far from impossible, but they will need to start picking up some points to produce some hope for their fans.

Watford’s campaign hasn’t exactly been an enjoyable one. The Hornets have lost 17 of the 26 league games that they have played this season, also losing their last seven home league matches in a row, spelling uncertainty for when Arsenal come to visit. Watford haven’t kept a single clean sheet at home, almost guaranteeing that Arsenal will get the better of them. Compounding the misery, Watford have conceded two or more goals in their last three home games, so with Troost-Ekong still sidelined, their defensive abilities don’t prove reassuring.

With Arsenal coming out victorious 1-0 in the reverse fixture, it seems like it may be a bit more comfortable for them on Sunday. Check out my bet builder selections, as well as the Cheat Sheet, and enjoy some Sunday afternoon Premier League football.

As two sides in opposing form come up against each other, an Arsenal win seems a certainty to me, and I’ve done some research to outline some reasons for you.

Watford have the least amount of home points in the Premier League this season. With their home form being nothing short of woeful, this will fuel Arsenal with a large amount of confidence, as they enter this game knowing that scoring goals at Vicarage Road is an easy task to come by. With six wins in their last eight Premier League games, Arsenal are in a golden period in their season, as they are on a run of picking up a handful of points. With only Manchester City beating them recently, the squad will be instilled with a sense of hope and strong belief that a top four finish for Arsenal is on the cards.

With three Premier League wins on the bounce, this will further inspire Arsenal to get the better of Watford, as putting together a winning run towards the tail end of the season will be vital for The Gunners. Playing Watford, a side that seems doomed for the Championship, presents itself as an easier-than-normal way to continue their winning run. Scoring 16 goals in their last six league games, this is more than a cause of worry for Watford, as their goal conceding rate at home is detrimental. This provides reason for Arsenal to believe that they will have the ball in the Watford net on a few occasions on Sunday.

With Arsenal also being victorious in their last three away games, this shows the strength of their form as they have produced unstoppable performances on the road. Also scoring in their last five away league matches, they are turning up when on their travels, and as they make the short trip across London, this trend seems likely to continue.

Emmanuel Dennis to have 1+ Shots on Target

Despite the likelihood that Arsenal will run riot against Watford, that doesn’t mean that the hosts should be completely ruled out. Despite not producing results that are adequate for comfortably surviving, they have a squad of talented players that have the potential to cause their opposition some issues. Emmanuel Dennis in the Watford attack is one of the brightest outlets in their squad, which is why I’m backing him to get a shot on target for when Watford make the most of the opportunities that come to them.

Averaging 2.26 shots per match in the league, this shows that Dennis proves himself as a threat, as he often manages to make room for some shots in order to pose an issue. With 1.08 of those shots hitting the target per match, this shows that he is a player to keep an eye on, and not someone to be disregarded as his strong attacking ability can cause his opponents some trouble.

The Nigerian has scored nine league goals this season in the league, proving himself as a shining light for when Watford have some good fortune. Dennis has an average shot distance of 14.9 yards, showing that he can mix up his game and hit them from distance as well as getting himself into the typical striker positions in the box.

A key stat to observe is that Dennis has exceeded his xG by 3.1. Scoring a few more than the stats expect him to, highlights his incredible ability to score goals from slightly more unnatural positions. As the game against Arsenal may provide him with less opportunities than normal, he still manages to make chances for himself from all areas on the pitch.

Prediction: Emmanuel Dennis to have 1+ Shots on Target

Granit Xhaka to be Booked

The referee in charge of this game averages 4.5 yellow cards issued per match this season. With bookings almost seeming like a certainty in this London derby, I’ve had a look at who I think is most likely to be booked, eventually landing on Granit Xhaka.

The Swiss international commits an average of 1.56 fouls per game, and is known for his short temper and reckless approach to challenges. Being in the centre of a London Derby, this will automatically heighten his ruthlessness and possibly lead to him making a few more dirty challenges than normal.

With five yellow cards and one red card to his name already in the league this season, Xhaka is definitely no stranger to finding himself being cautioned. As Arsenal may look to dominate possession in this game, Watford may be able to hurt them on the counter. If they catch Arsenal out and pose a true threat when on the counter, we have seen countless times that Xhaka will not hesitate to put an end to a possible attack by any means possible, yet again increasing his chances of being booked.

With Xhaka having a 84.9% pass completion rate, this provides another opportunity where he can make some fouls. If he loses the ball, he will be determined to win the ball back, as there is certainly scope for him to misplace the odd pass. Yet again, using his ‘by any means necessary’ approach, Xhaka can act without thinking in certain situations and eventually finding himself in the referee’s book.

Prediction: Granit Xhaka to be Booked

Back the 7/1 Watford v Arsenal Bet Builder below ⬇️

Sign up to Paddy Power and get a full refund if your first bet loses. Grab an account through the offer below and place £30 on the 7/1 Watford v Arsenal Bet Builder. Here are the two possible outcomes:

How to watch Watford v Arsenal in the Premier League