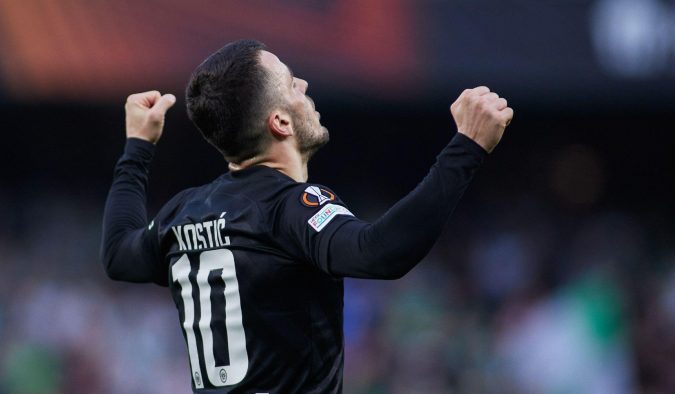 West Ham take their next step to fulfil their Europa League dream on Thursday night, as they host Frankfurt in the first leg of their Europa League semi-final tie at the London Stadium. Both of these sides came out on top in their quarter final matchups with two remarkable results away from home to see them progress.

Incidentally, these sides actually met in 1976 in a thrilling European Cup Winners’ Cup semi-final where the Hammers came from behind to win on aggregate in a game where the fans played a huge part. This could be the case again here as 60,000 Hammers make their way to the London Stadium to intimidate the German outfit.

West Ham come into this on the back of a disappointing defeat against their city rivals, as Chelsea fired a late winner past Fabianski to continue West Ham’s poor domestic form. Meaning that they only have 1 win from their last 5 games in all competitions. This win came against Lyon in the last round of the Europa League where they battered them 3-0 in their own backyard. Frankfurt also only have 1 win from their last 5 in all competitions, with their win coming against European giants as they forced a shock exit for Barcelona at the Camp Nou.

Domestically, Frankfurt aren’t having the best of seasons as they sit 10th in Bundesliga. West Ham on the other hand, are enjoying a better season as they sit in 7th and still in with a chance for more European football next season.

N’Dicka and Jakic both miss out due to suspensions and a few defensive injury concerns for David Moyes’ West Ham may leave them slightly exposed at the back.

It doesn’t get much bigger than this for these clubs, two great clubs with great fans will battle it out for the advantage to take to the second leg. Take a look below at my bet builder for this highly anticipated Europa League semi-final clash along with a pre match cheat sheet below!

Filip Kostic to have 1+ Shot on Target

The first selection focuses on the man responsible for knocking out Barcelona in the previous round with 2 goals and an assist in his man of the match performance. Filip Kostic is one of the first names on the team sheet for Oliver Glasner with the wing backs expertise in both attack and defence, making the Serbian indispensable for Frankfurt.

At the Camp Nou, Kostic registered 3 shots on target from his 4 shots and proved to be the difference in attack, he will definitely cause chaos out on that left wing where the majority of his shots come from with only 7 shots from his last 75 coming from the right side of the pitch. In all competitions, Kostic has 1.8 shots per game with 41.5% of his shots hitting the target. West Ham average 2.8 shots on target conceded per game in Europa league and 4.8 in the Premier League.

At evens for this selection, I think this is a great price after his previous Europa League performance and I expect him to test the West Ham goalkeeper at least once.

Prediction: Filip Kostic to have 1+ Shot on Target

Frankfurt to Receive the Most Cards

The next selection is Frankfurt to pick up the most cards, the German outfit have picked up the 2nd most yellow cards in Europa League with 24 in 10 games, averaging 2.4 yellows per game whereas the hosts only average 1.4 cards per game.

Frankfurt have committed the most fouls in the competition so far with 166, meaning that they average 16.6 per game and with Serdar Gozubuyuk officiating, I can see a few cards coming their way in a hostile London Stadium as the Dutch referee averages 6 yellow cards from his 2 Europa League matches he has taken charge of this season. West Ham commit a lot less fouls per game than their visitors with only 9.6 per game which is another reason I think they will pick up less cards than Frankfurt.

In their dramatic win in Spain, Frankfurt picked up 7 cards which seen centre back N’Dicka sent off after being shown a second yellow card. With the hostile atmosphere that the West Ham fans will create, this could also see Frankfurt players losing their heads which could lead to flying tackles and bookings and I think that Frankfurt will end the night with more players in the referees book.

Prediction: Frankfurt to Receive the Most Cards

My final prediction is both teams to score. As I mentioned before, both sides had impressive away results in the last round, scoring 3 goals each against high quality opponents to progress to the semi-final so there is clearly no lack of goal scoring threats. It looks to be a tough game to call with both sides capable of getting on the scoresheet here with impressive attacks.

In recent games, Frankfurt haven’t been able to stop leaking goals and have failed to keep a clean sheet in their last 5 which has seen both teams scoring in 4 of these. As for the home side, both teams have scored in 4 of West Hams last 7 so there is plenty potential to see goals in this semi-final clash.

These sides have an impressive goalscoring record in this competition with both sides racking up 1.7 goals on average per match, with 17 goals in total meaning that they are the 5th highest scorers.

West Ham have conceded in 6 of their last 7 games, so they clearly have troubles keeping the ball out of the net too. Frankfurt have scored in 4 from 5 of their last matches so I fancy both teams to find the net.

Both sides clearly score goals for fun, Frankfurt average 1.36 goals scored per game in Bundesliga while conceding 1.4. The Hammers also average more than a goal a game in the Premier League with 1.53 scored per game and 1.29 goals being put past them each match so it looks as if goals could be on the cards.

Back the 5.47/1 West Ham v Frankfurt Bet Builder below ⬇️

Sign up to Paddy Power and get a full refund if your first bet loses. Grab an account through the offer below and place £30 on the 5.47/1 West Ham v Frankfurt Bet Builder. Here are the two possible outcomes:

How to watch West Ham v Frankfurt in Europa League