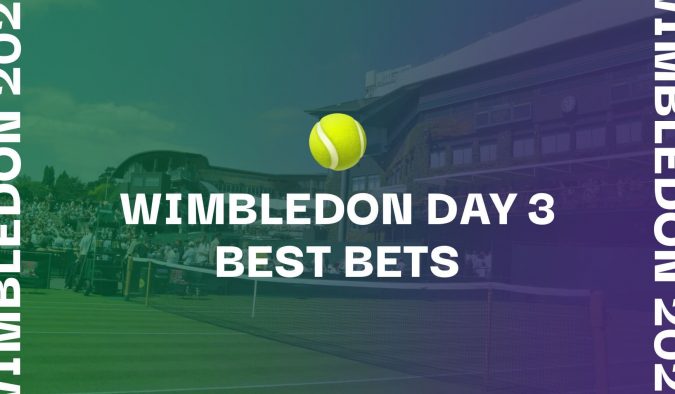 A tight, long match looks like the call in this one.

A look at the pair’s head-to-head record shows all three meetings have been decided by a final set and it would be no great surprise to see that happen again here. Both players have already contested a lot of tie-breaks in the current grass court season – Ruud has actually played four in his five sets on this surface in 2022. Humbert has disappointed this season but he’s at his best on a surface which allows him to attack, whereas French Open finalist Ruud is now having to deal with faster, lower-bouncing conditions than he’d ideally like. That should prove a leveller.

With the pair both being decent servers, break-point chances may be at a premium and so going overs in the total games market makes appeal.
40.5 games is the line chalked up by the layers and going above it looks the best play.

Probably the most unheralded British player that I can remember, Cameron Norrie cruised into the second round with the demeanour of a man suited to being a top ten player.

The thing about Norrie is that he will very rarely let you down. His strokes are somewhat unorthodox but they are solid and consistent. Norrie’s fitness is also top level, something that he has learned from Andy Murray.

Munar won his first ever grass court match in the first round but this is surely a step too high for the Spaniard. If Norrie can start the way he did against Andujar then there’s a chance that Munar could go through the motions somewhat.

With the way that Norrie’s quarter has opened up with the exits of Hurkacz and Dimitrov there is every chance for the Brit to progress very deep into this tournament so conserving energy by winning in straight sets should be seen as a target.

These are two potential future stars of the WTA tour but it’s teenager Parry who looks the most likely winner here.

She impressed in Monday’s straight-sets dismissal of 31st seed Kaia Kanepi and will be full of confidence heading into this one. There were some signs prior to that match that Parry was capable of such an upset. She was the player who beat defending champion Barbora Krejcikova in the first round of the French Open last month, while she then hit the grass and reached the last four of the WTA 125 event in Gaiba, Italy.

Her one-handed backhand is reminiscent of former Wimbledon champion Amelie Mauresmo – indeed her compatriot has helped hone the shot – and gives her a little extra reach. Hontama only progressed to this stage because opponent Clara Tauson withdrew after five games on Monday due to injury.

Parry also has the greater power here and the former world junior number one can be added as a cornerstone of any multiple.

Juvan is a player of immense capability. To take out Beatriz Haddad Maia, who was many people’s outside tip for the tournament, was a surprise, but not a shock. She has shown this level of capability sporadically throughout the last year or so.

Certainly if Juvan is able to play to that level again against Galfi then there is only one winner. I wouldn’t expect it to be quite as comfortable as that as Galfi is in some form. She won a Challenger event before Wimbledon and obviously squeezed through round one as well. However, it is that performance that makes me confident that Juvan should take this match. Galfi played a scrappy, tight three-setter against the Australian Maddison Inglis. The Hungarian will have to improve a few levels to get the better of the Slovenian.

It will be the battle of the serves that decides the outcome here I suspect. Juvan won 83% of her first serve points against Haddad Maia, again a repeat of those kind of levels should be good enough, she conceded only 1 break point in the match. Galfi fired down 8 aces against Inglis, but only won 45% of her second serve points. This indicates to me that her second serve is something that Juvan can prey upon to take the initiative in the points.

Murray has won all eight of his previous meetings with the big-serving Isner and so it’s hardly a shock to see him as a 2/5 favourite for another victory on his beloved Centre Court.

But there’s a way of getting with Murray at odds-against – namely backing him to win with both players winning a set. The Scot landed that bet in his first-round victory over James Duckworth and has now gone 14 Grand Slam matches without managing to win in straight sets. His last such success came here in 2017 when he was still world number one and didn’t have a metal hip.

A few days later, Murray’s career changed forever and the subsequent surgery he required has arguably affected him most on his once world-leading return of serve. Murray once enjoyed a run of 136 matches in which he broke his opponent’s serve but in 2022 alone he’s failed to break on five occasions.

Given the changes to his physicality, Isner’s bombs will likely prove tougher to return than in previous matches and I can see the American grabbing a set here, maybe via a tie-break. He’s won a set in four of those eight previous meetings and can do so again but I doubt he’ll be able to actually win the match.

Isner struggled through the opening round in five sets after opting against any competitive grass court preparation so won’t be at his best.

The Spanish superstar survived his brush with Jen-Lennard Struff in the opening round here but had to go all the way to five sets to pull off the victory. There were some concerning lapses in concentration and too many unforced errors, interspersed with some inspired tennis as well of course. However, I don’t think we will see the gameplan change too much in the second round and whilst Alcaraz should still win this match there are doubts.

Griekspoor has some similarities to Struff in that he has a solid serve that will be very tricky for Alcaraz to make much of on grass. The Dutchman is also someone who rides momentum particularly well, if he can get on top then he can be difficult to stop.

Alcaraz reminds me of, yes, Rafael Nadal, in that in Nadal’s early forays on grass he couldn’t quite work out how to play on the surface, especially when having to transition from the clay. I also think that he will be able to get it right and it will click for him. The Spaniard has a more all-round game than even Nadal at this stage of his career but he currently has enough weaknesses to concede at least one set to Griekspoor here.

Sign up to Paddy Power and get a full refund if your first bet loses. Grab an account through the offer below and place up to £30 on any of the Day Three Wimbledon Best Bets. Here are the possible outcomes: