Read about how two Analytics.Bet classmates John Benedict (Co-founder of Sharpe Edge ) and Tom Quinn, connected on the class private Slack channel and applied lessons learned in class to exploit an opportunity in the NFL Season wins market. Depending on your bet sizes, this opportunity alone would have paid for the class, the following class (Bayesian Sports Betting), with profit left over. For anyone interested in a more formal discussion of the math behind these models should check out NFL Season Win Totals: Two Easy Ways (And One Fun Way) to Find +EV Bets – Analytics.Bet or sign up for the AASB class at Analytics.Bet. All of the methods used for these bets were taught in the class and the identification of profitable sportsbook offerings were shared in the private slack channel.

During a class of the inaugural run of Applied Analytics and Sports Betting, Professors Harry Crane and Phillip Maymin were sharing examples of how they used specific analytic techniques to find profitable betting opportunities in the past. Harry provided the example referenced above describing how he used a Beta-Binomial Distribution to estimate the probability of exact win totals of every NFL team. The process uncovered a significant number of profitable opportunities in the prior season. Amazing, but not replicable. Matt Buchalter (PlusEVAnalytics) had published the work and opportunity before the prior season and many popular sportsbooks had adjusted.

What is the intuition behind the opportunity?

The over / under bets on NFL season win totals tend to be a deep, liquid market. This implies that they are tough to beat without excellent handicapping skills. However, exact win bets (i.e. Eagles win exactly 10 games) historically had a flaw in how they are priced, which you could exploit with knowing the right way to model the problem. Generally, sportsbooks priced exact win bets with an assumption that the “skill” of a team is constant. The reality is that this “skill” is extremely volatile. Rookies will surpass or fall short of expectations, coaches will be better or worse than expected, QBs will be injured, etc. In summary, some books had taken a shortcut to price exact win totals. This shortcut significantly underestimates how often wild outcomes actually happen.

One evening after work a couple weeks later, I noticed that a popular site had expanded its offerings to include NFL exact season win totals. I reviewed a few teams’ offerings and sure enough the prices seemed to have adjusted to Matt’s discovery the year before. I  checked the other well known sites, but an eyeball test suggested they were fair odds. If anything, it seemed as though they had overcompensated for the year before – a common trend in all walks of life.

I reasoned if an opportunity existed, it would likely be in a sportsbook that:

2)      Less popular nationally, so if they do offer a line with value, it is less likely anyone has bet into it yet and moved the line

I put together a short list, including a sportsbook I recently heard about at a recent VIP appreciation event. The site not only offered the market but also appeared to be at an advantageous price. I spot-checked the Chiefs offerings and immediately saw their odds diverged significantly from the more popular sportsbooks I had seen the day before.

Using KC as a test case, I began to consolidate the offerings of the new book and one of the market leaders into a spreadsheet and identified the best odds available at each win total between the two sportsbooks as highlighted in green in the chart below. I notice that a 12% risk-free return could be achieved with this strategy, which indicates a massively favorable opportunity.

However, I was not willing to commit the time or energy to build a Beta-Binomial model from scratch at 11 pm on a work night. Limits (due to prior sports bets) on the more popular sites eliminated the possibility of playing the available arbitrage, so I took a few easy-to-identify bets (i.e. KC to win 16 games at 60-1). Just because I don’t have the midnight adrenaline to model it out doesn’t mean someone else doesn’t. I post the following in our classes’ slack channel and enter Tom Quinn:

I love nothing more than betting on mispriced tail events, so I jumped on the opportunity John presented and spot-check the site, I focused on the Cardinals as a team I viewed to have a wide range of outcomes for the season. It was obvious to me that the sportsbook that John identified was mispricing the tail outcomes (Higher peak and flatter tails in the chart below). 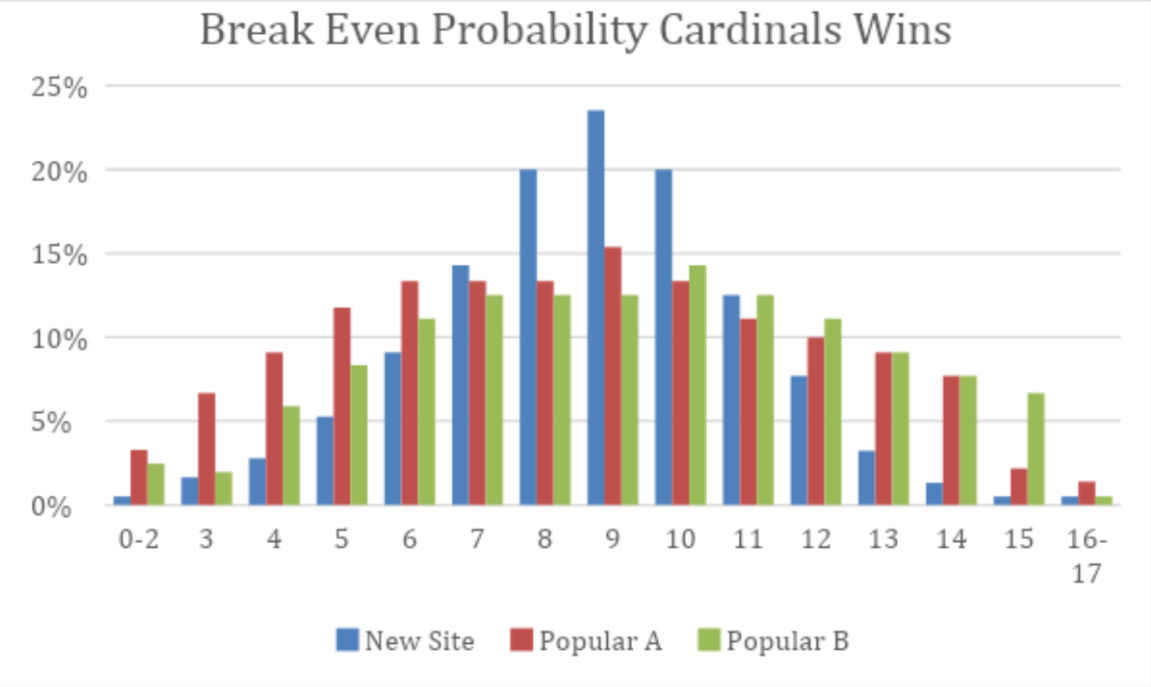 A few other members join the discussion and began to bring up additional sportsbooks to check and pointed out the flaws in my many attempted shortcuts to find the most profitable bets.

I finally decide to build the model Harry and Phil went over in class. I am a mediocre programmer, so I would have to make it work in Excel. I believed that my approach was very rudimentary and flawed until I enrolled in the Bayesian Sports Betting course and found out that Matt, whose work I was trying to replicate also does most of his work in Excel and the solver functionality offered.

I won’t bore you with all of the details of the modeling, you will have to take the class to for that. But a brief summary:

To calculate the probability of an outcome using a Beta-Binomial model, you need 2 inputs (A and B), which can’t be directly calculated (of course). You can however observe A+B, which we had calculated in class to be 18.3 for the 2020 season. We calculated prior seasons as well, but I chose to use the 2020 number due to Covid related issues with player availability being a common factor not accounted for in prior seasons.

I calculated the market-implied median number of wins for each team using a combination of ‘sharp’ over/under lines (also taught in class). This gave me a specific data point to target (what values of A and B would 50% of forecasted outcomes fall below the median estimate, while A+B=18.3). To solve this, I used the Excel solver and a statistical add-in to excel, which calculated the beta binomial function. (Vose Risk software)

Once I had the A and B parameters for each team, it was a straightforward process to calculate the probability of each exact win total.

Using the odds posted on the first book John discovered, we identified 36 bets where the edge was greater than 70% based on our probability estimates.